Rory McIlroy will play in the final group at the Slync.io Dubai Desert Classic after making his way through the field on Saturday. 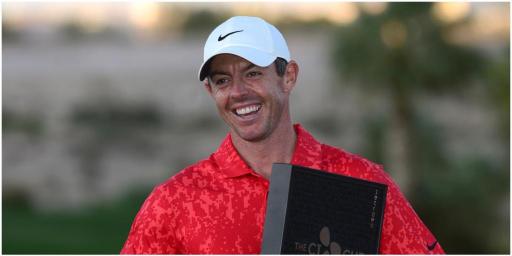 Rory McIlroy will have a chance to win his third Slync.io Dubai Desert Classic victory after making his move on Saturday.

The Northern Irishman, 32, made his debut here in 2006 and ever since has had a love affair with Emirates Golf Club.

By the close of play on Saturday, McIlroy managed to vault himself up the leader board and into contention to claim another win.

McIlroy will play alongside Justin Harding, the elegant South African who has a two stroke lead over his nearest challenger.

At times it looked as if McIlroy was struggling to make some ground on the field as after nine holes he was only 1-under.

But an eagle at the 10th breathed some life in his round at this Rolex Series event, the second in as many weeks.

Despite dropping one shot straight back a hole later, two more birdies followed to see him card a 3-under 69.

If McIlroy were to claim victory it would see the current world number eight claim his 15th victory on the DP World Tour.

Speaking after his round, McIlroy told Sky Sports: "Yeah, I think it was a fair reflection of how I played.

"It's nice to give myself another opportunity."

Only Ernie Els has won this tournament three times.

McIlroy and Harding are also being chased by England's Tommy Fleetwood and Bernd Wiesberger who are both 9-under thru 54.

The 35-year-old South African is looking for his third victory on the DP World Tour.

Defending champion Paul Casey is also not out of it, and joins a crop of seven players who are at 8-under par.

Rory McIlroy will play in the final group on Sunday

Next page: Brooks Koepka has a new name along with his new hairstyle