Former Ryder Cup Europe captain Paul McGinley has blasted suggestions the DP World Tour is bankrupt despite their alliance with the PGA Tour. 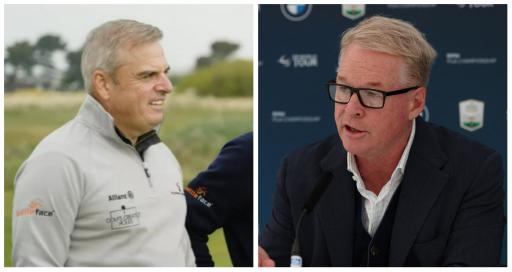 McGinley, 55, has given an interview to the Irish Independent's Brian Keogh where he denied the "bull****" suggestion the tour is bankrupt.

As you would no doubt expect as a member of the DP World Tour's board, McGinley has strong feelings about the European-based circuit.

Related: McGinley calls for Presidents Cup to be a mixed event

In November he stated he felt hurt by the "undeserving" criticism of the strategic alliance that exists between the PGA Tour and DP World Tour.

This alliance was further strengthened in June with the announcement of a 13-year deal after the emergence of LIV Golf.

As part of that deal there was the confirmation of a global pathway system, which will see the leading 10 players in the Race to Dubai Rankings earning PGA Tour cards for the following season.

McGinley denied this would mean the DP World Tour would essentially become a feeder tour.

"Relations have never been better between the two tours. They are working very collaboratively together. We've just announced record prize funds and so has the American tour.
"I know everybody doesn't want to believe me and everyone wants to believe the rumours that we're bankrupt and we were saved by the Americans and all that bull****. That's absolutely not true.

"We've now hitched our wagon to the PGA Tour, and it provides long-term security for every player on the DP World Tour going forward. It's a phenomenal deal we've done with the PGA Tour.
"And it's the path of least resistance in terms of risk. So it's a great opportunity now for the European Tour to grow and slipstream with the PGA Tour. The big benefits of the strategic alliance will really kick in in 2024 when you're going to see more joined-up thinking between the two tours."

McGinley's comments come as the Japan Golf Tour have announced a partnership with the DP World Tour.

That will see the top three players from the JGTO order of merit gain membership on the DP World Tour beginning with the 2022/2023 season.