Rory McIlroy will HATE his second round pairing at DP World Tour Championship!

Rory McIlroy is out with a LIV Golf rebel in the second round of the DP World Tour Championship, and he is not particularly fast either... 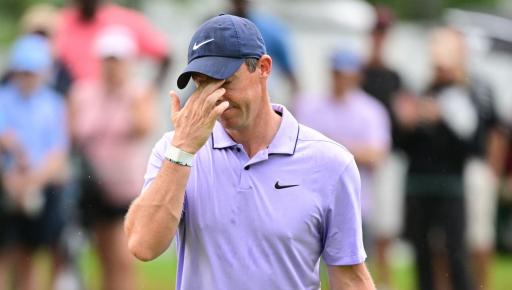 Rory McIlroy will be left to rue a disappointing finish to his opening round of the DP World Tour Championship even more this evening after it has emerged he will be out with LIV Golf rebel Adrian Otaegui in the second round.

Another reason why PGA Tour and DP World Tour lead ambassador McIlroy will unlikely fancy the pairing with Otaegui, who recently ruffled a few feathers when he returned to the DP World Tour to win the Andalucia Masters, is that the Spaniard is hardly one of the fastest players on the circuit.

And that is being polite.

So much so, one Tour pro (who has also dabbled with LIV Golf himself this season) has blasted Otaegui for playing like a turtle.

Another pro took aim at him, too.

Rory McIlroy after seeing he's been paired with LIV Golf's Adrian Otaegui for the second round of the DP World Tour Championship pic.twitter.com/TNZkOO9TpY

Otaegui has played in three LIV Golf tournaments this year, and it remains to be seen whether or not he returns to the breakaway golf league or the DP World Tour in 2023.

Much of that will likely depend on the next court hearing between LIV Golf players and the DP World Tour in February.

McIlroy has been a strong critic of the Saudi-backed LIV Golf Tour for much of the season, but he has gradually come round to the idea that "compromise" is now needed with the PGA Tour and DP World Tour in order for the sport to move forwards.

Earlier this week, McIlroy urged Greg Norman to be axed from his role as LIV Golf CEO because he considers the only way that compromise can happen is if there is "an adult in the room".

Ryan Fox, who played with McIlroy in the first round, revealed earlier this week how McIlroy is a "voice of common sense" during a "messy" time for the sport as a result of LIV Golf.

McIlroy had got off to a solid start in the first round of the DP World Tour Championship earlier today when playing the first eight holes in 3-under par, but then the wheels quickly came off with three bogeys on the next eight holes.

The World No.1 did salvage some pride with a birdie on the par-5 18th to get back into the red at 1-under par, but he now looks on from the chasing pack six strokes behind early English pacesetters Matt Fitzpatrick and Tyrrell Hatton.

He should have fun tomorrow. pic.twitter.com/IE48Ug9QGI

Otaegui made three birdies and two bogeys during his opening round of 1-under 71.

McIlroy did have the lead in the season-long DP World Tour Rankings race but he is currently projected to finish in second place behind Fitzpatrick as things stand.

But of course there are still 54 holes to play, and much can and probably will still happen as McIlroy goes in search of a fourth rankings title on the former European Tour circuit.

Scroll below for R2 Tee Times in full...

Next Page: Xander Schauffele SHUTS DOWN rumour about him and Patrick Cantlay going to LIV Golf