Thomas Pieters tweets DP World Tour "ARE YOU DRUNK?" during his second round

Thomas Pieters tweets his displeasure while out on the course in brutal weather conditions at the Alfred Dunhill Links Championship. 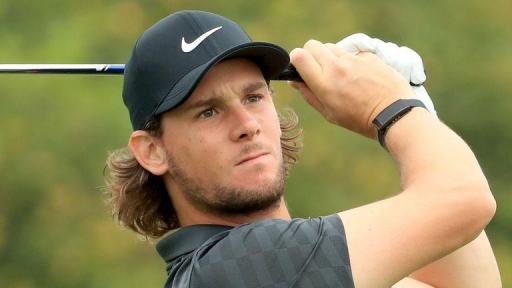 Thomas Pieters tweeted "are you drunk?" to the DP World Tour during his second round of the Alfred Dunhill Links Championship.

Pieters got off to a brilliant start with a 65 at Carnoustie in round one but then struggled badly like so many others in brutal weather conditions in round two at Kingsbarns.

It is fair to say the conditions experienced by the players at Kingsbarns, the Old Course at St Andrews and Carnoustie on Friday were the worst that have been seen all season on the DP World Tour.

As a result of the forecast conditions, the DP World Tour chose to send all the players off in a shotgun start at 8.30am.

LIV Golf supporters, as you can imagine, saw the funny side of that decision.

While the call was made to help ensure the tournament can finish all 72 holes by Sunday evening, Pieters clearly did not believe the players should have been out there at all, at least that is the message we are taking from his tweet.

Pieters made an early birdie on his first hole in the shotgun start at the par-5 3rd but then made a triple-bogey seven on the par-4 7th.

That meant Pieters was 8-over for his round, and it was there where he reached for his phone and took to Twitter.

@DPWorldTour are you drunk?

"Are you drunk?" Pieters tweeted the DP World Tour.

With phone back in the bag, Pieters was back for another double-bogey six at 18.

That took him to 10-over par for the round and he then added a final bogey on his last hole for a round of 11-over 83.

Pieters now finds himself at 4-over par for the tournament and well off the pace heading into the third round at St Andrews.

But not everyone struggled out there though as England's Richard Mansell carded a superb 4-under 68 on the Old Course to move into the outright lead on 10-under par.

Round of the day so far @richardmansel14 with an impressive 68 in very tough conditions. #DunhillLinks

Alex Noren moved two shots behind Mansell thanks to a brilliant 3-under 69 at Kingsbarns, which appeared to play the toughest of the three courses on Friday as a result of it being so exposed to the wind.

Mansell, who is bidding to win his maiden DP World Tour title, will now head to Carnoustie on day three, before returning to the Old Course for the final round with everyone else who makes the 54-hole cut. Noren, looking for his 11th victory on the DP World Tour, heads to St Andrews on Saturday.

Rory McIlroy started well with a round of 68 but like Pieters, he tumbled back into the pack on 1-under par with a round of 75. McIlroy was seen wearing two gloves during his round.

Pieters' tweet to the DP World Tour, which was clearly directed at them allowing play to continue on day two, did not appear to go down well with golf fans watching on from the comfort of their living rooms.

Can’t hack it can you. You forgot to tell the officials you didn’t mean to hit every shot.

Get on with it . Pathetic

Doesn't like getting paid hundreds of thousands of euros playing in a bit of wind and rain, what a poor poor chap. Wouldn't last 5mins in a local winter medal playing with 3 geriatrics.

This is the weather golf was intended for.

Thought it was you who was drunk today buddy

If you’re complaining about the weather, then try doing a real job in that? If not then what’s the issue?

Eddie Pepperell told Sky Sports Golf's Tim Barter on the walk round that "these are the worst conditions I've ever played in... it's disgusting."

Saying that, Pepperell still managed to make a hole-in-one on the 8th at Kingsbarns.

"It gave a few of my fans something to cheer about," said Pepperell.

Last week on the DP World Tour, Pieters experienced one of the more bizarre incidents on the putting green.