Shane Lowry and other DP World Tour players appeared less than amused with LIV Golf Tour player Bryson DeChambeau, who roasted himself over a viral clip. 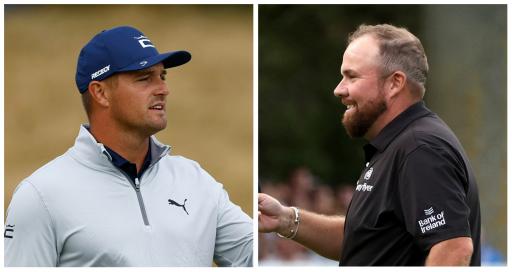 Shane Lowry would have likely been in a buoyant mood heading into this week's Alfred Dunhill Links Championship on the DP World Tour, fresh after claiming his first victory in three years - but it appears a post by Bryson DeChambeau has dampened his spirits.

We are talking, of course, about DeChambeau's now-famous battle versus a rope. In case you missed it, DeChambeau got taken out by a gallery rope during the final round of LIV Golf Chicago.

After muscling his way into the final 64 of the Pro Long Driver's world championship, 29-year-old DeChambeau decided to roast himself by proving to the world that he could navigate a rope without almost decapitating himself.

Seeing this, Lowry and Thomas Pieters - who called himself a lucky idiot recently after a bizarre rules incident at the Open de France - were less than impressed with DeChambeau's clip.

"Not sure what's worse, this or tomorrow's weather forecast," wrote the 2019 Open champion. "Not even close," added Pieters. Prominent LIV Golf Tour critic Eddie Pepperell also chimed in: "Both not great".

Not sure what’s worse, this or tomorrow’s @dunhilllinks weather forecast…
pic.twitter.com/NcKni2p2ax

Now come on Shane, the forecast doesn't look that bad!

For the most part Lowry, 35, has remained silent during the PGA Tour's back-and-forth with Greg Norman's LIV Golf Invitational Series.

That was until a few weeks ago before the DP World Tour's flagship event at Wentworth.

"I can't say I'm 100 per cent okay  with everyone being here, but some of the guys, I kind of don't mind them being here because of what they've done on the tour over the years," Lowry told Sky Sports before the BMW PGA Championship in reference to the LIV players in attendance.

When he claimed victory in the 54-hole tournament, Lowry then sniped: "I wanted to go out and win this tournament for myself, first and foremost, but also for this tour and everyone that's stayed loyal to this tour. I feel like this is one for the good guys."

Lowry refused to be drawn into talk about LIV Golf before this week's tournament, which is being played at Carnoustie, Kingsbarns and the Old Course at St. Andrews.

He played Carnoustie in the first round and carded a 2-under par 70, which was nine strokes off the early leader Romain Langasque. The Frenchman equalled St. Andrews' course record on day one.