Rory McIlroy appears to have taken a break from talking about the LIV Golf Tour to defend his caddie, Harry Diamond, once again. 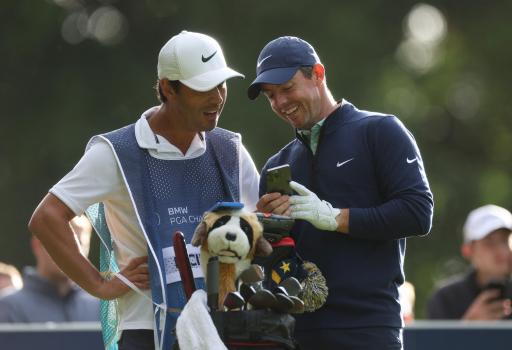 Rory McIlroy - who has been outspoken once again this week - has swatted away criticism of his "easy target" caddie Harry Diamond as he revealed he feels like he's on a journey to winning his first major again because "it's been so long".

McIlroy, 33, spoke to BBC Sport after carding a 3-over par 75 after finishing up his second round at the Alfred Dunhill Links Championship on the DP World Tour.

The Northern Irishman began the tournament well with a 4-under 68 at Carnoustie Golf Links but could only laugh today at St. Andrews' Old Course, which was memorably the scene of his most heartbreaking moment this summer when Cameron Smith claimed the Claret Jug.

The players were simply battered by the elements.

Well, Shane Lowry did warn us. Thomas Pieters also took to posting a message on social media during his round.

As for McIlroy, who sits in 41st, 10 strokes behind the leader Richard Mansell, he defended Diamond when pressed once again on the topic of his bag man.

Diamond began working for the Ulsterman in 2017 following his split with JP Fitzgerald.

The pair have won a number of titles together. Two FedEx Cups, The Players, multiple PGA Tour Titles and DP World Tour wins.

But he keeps striking out on the majors. If you didn't know, McIlroy hasn't won a major since 2014.

"I think over the years I've proven I know what I'm doing out here," McIlroy told BBC Sport Northern Ireland.

"I wouldn't have him on the bag if I didn't think he was good at what he did."

He continued: "Harry's a really calming presence to have by my side.

"He's grown into his role really well. I think our record speaks for itself. We've won a ton. We've won two FedEx Cups together.

"I've no doubt in my mind if I keep playing the golf that I'm playing currently, I'll have a lot more chances to win major championships."

Does he feel like that major will come in 2023?

"The more I put myself in position to win, the more comfortable I'm going to feel in that position and ultimately I'm going to step through the door and get another one," McIlroy told the publication.

"It's funny it feels like I'm on a journey to win my first one again because it's been so long since I've done it. That just maybe gives people more of a perspective where my mind's at. It's not just 'he's won four…why can't he win another?'

"I feel that was such a long time ago and I'm sort of a different person now and I need to relearn sort of how to do it. I'm on that journey but I'm getting close."