At the 2020 BMW PGA Championship, Tyrrell Hatton wore an adidas Golf hoodie which caught the eye of many golf fans. 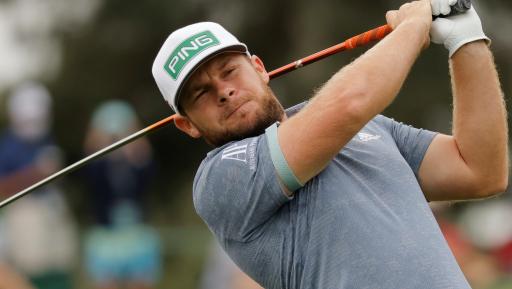 Tyrrell Hatton is known for his fiery and impatient temper on the PGA Tour and he played on this in adidas Golf's latest clothing advert.

At last year's BMW PGA Championship at Wentworth, Hatton became one of the first golfers to sport a new adidas Golf hoodie and it caught the eye of many golf fans.

So this year, he has participated in an advert for adidas Golf to show off the new hoodie that he will be wearing, but in an underwhelming and lazy style.

Throughout the video, the World No. 17 behaves very unenthusiastically and it looks like he can't be bothered to advertise the popular golf clothing item.

The video has superimposed the Englishman as walking around Wentworth with his golf hoodie on, even though it is revealed that he is at the famous European Tour venue anyway, using a green screen with the production crew.

RELATED: 5 REASONS WHY JON RAHM SHOULD BE PGA TOUR PLAYER OF 2021 AND NOT PATRICK CANTLAY

It is a great and hilarious advert that is typical of Hatton's outgoing personality. He has been seen in other funny sketches that have been produced by the European Tour in the past.

The six-time European Tour winner is the reigning champion at the BMW PGA Championship, after he completed a four-stroke victory at the event last season.

He is one of the favourites to win back-to-back titles in 2021 and he will want to find form ahead of the Ryder Cup, which he will almost certainly be a part of at the end of the month.