Viktor Hovland beat Richard Bland in a playoff to win at the Emirates Golf Club, while Rory McIlroy collapsed on the 72nd hole to miss out on extra holes. 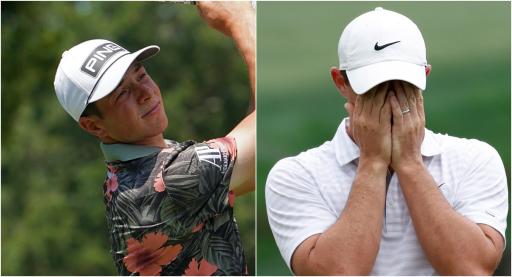 On the first hole in the sudden death format, Bland missed a crucial birdie putt to allow Hovland to tap in for victory. It is the young Norwegian's second win on the DP World Tour.

This victory, his third on all tours in the space of two months, has moved him to third in the world rankings behind Jon Rahm and Collin Morikawa.

"I didn't really think this was possible going into today. I knew I had to shoot a really low number and a lot of things had to go my way. I'm thankful that it did," said Hovland.

RELATED: PGA TOUR: HOW MUCH DID EACH PLAYER WIN AT THE FARMERS INSURANCE OPEN?

"I was fuming after the three-putt on 15, I thought that was it and I knew I just had to try to finish well and try to get a nice position for the week. Rolled a really long one on 16 and on 17 and hey, we got a shot!"

What a drive, what a putt!

"I'm pumping right now and it's a little bit surreal."

Hovland began the day six shots behind the leader Justin Harding but the South African ultimately dropped out of contention with a triple-bogey at the par-4 11th hole.

The 24-year-old, who started the week at fifth in the world rankings, began his final round in great fashion with three birdies in his opening seven holes.

He had cut the deficit to three shots behind Harding at this stage who was on 11-under-par, while McIlroy fell to two shots behind with a bogey on his first hole of the day.

The Northern Irishman began to crank up the pressure with back-to-back birdies on the 6th and 7th holes to share the lead with nine holes left. He bogeyed the 10th but bounced back at the 11th hole to take the solo lead on 11-under-par.

At this stage, Bland came into his own. The 48-year-old made three consecutive birdies from hole 9 to hole 11 to reach 10-under-par.

As Hovland said in his post-victory interview, his damaging three-putt on the 15th hole took him back to 8-under-par. But he played his last three holes in 4-under-par, including an eagle on the 17th hole.

Hovland carded a 66 and set the clubhouse lead on 12-under-par and Bland, the winner of the 2021 British Masters, rolled in a fantastic birdie putt on 18 to meet this mark.

As for McIlroy, he was on 12-under-par in the middle of the 18th fairway. He hit his approach to the green in the water and went on to bogey the par-5 to miss out on the playoff.

Both Hovland and Bland hit good tee shots on the par-5 18th hole for the playoff. Bland, double the age of his opponent, found the side of the green with his second shot while Hovland found the green.

Unfortunately, the popular couldn't get up and down and Hovland was left to tap in for birdie and the win.

NEXT PAGE: COULD TOM BRADY BECOME A GREAT GOLFER IN HIS RETIREMENT FROM NFL?