Rory McIlroy baffled the caddies in the group in front at the Alfred Dunhill Links Championship on the DP World Tour when he unleashed a huge drive. 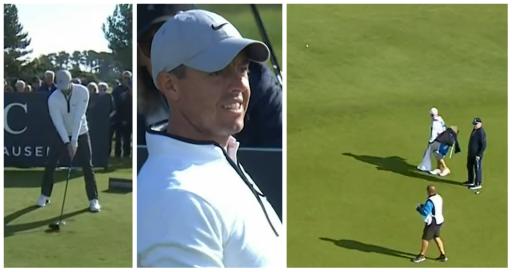 Rory McIlroy - when he's not talking about the LIV Golf Invitational Series - occasionally likes to dabble in a bit of professional golf.

The Northern Irishman, 33, is playing the Alfred Dunhill Links Championship on the DP World Tour this week in search of his 15th win on the European circuit.

McIlroy started his tournament at Carnoustie and fired an opening round of 4-under 68 which contained six birdies and two bogeys.

He'll have some work to do if he is to force himself into contention as Frenchman Romain Langasque equalled the course record at the Old Course with mind-boggling 11-under 61.

Langasque managed eight birdies and two bogeys, his only blemish coming at the par-4 11th at the Home of Golf.

But back to McIlroy, who produced another McIlroy moment.

It came at No. 7, which is a par-4 measuring at 409 yards. McIlroy took a swing with his TaylorMade Stealth Plus and is not entirely happy with it.

In fact, he's disgusted. His facial expression says it all. "Ugh! stay in the fairway," he said after finishing his swing one-handed.

Can we just pause for a moment and enjoy the reactions from the caddies group in front? "Where did that come from?!" Priceless.

McIlroy would go on to make par on the hole as despite his golf ball finishing just shy of the front bunker, he left himself a tricky downhill pitch.

We have already seen some remarkable moments this week. In his practice round, England's Tommy Fleetwood managed to knock two balls in at the same time (!) on the famous Road Hole at St. Andrews.

McIlroy had spent the earlier part of the week urging for a swift resolution to the PGA Tour's battle with the LIV Golf Tour.

That prospect looks unlikely now, as the PGA Tour has announced they are countersuing Greg Norman's LIV Golf.

"If Dustin Johnson is somehow 100th [ranked player] in the world it's not an accurate reflection of where he is in the game," McIlroy previously told reporters.

"But at the same time, you can't make up your own rules. There's criteria there, everyone knows what they are and if they want to pivot to meet the criteria they can.

"I've not problem with them [LIV players] getting ranking points at all but you have to meet the criteria. If you don't it's harder to justify why you should have them."

"If we can send rockets to the moon and bring them back again and have them land on their own I'm sure we can figure out how to make professional golf cohesive again."