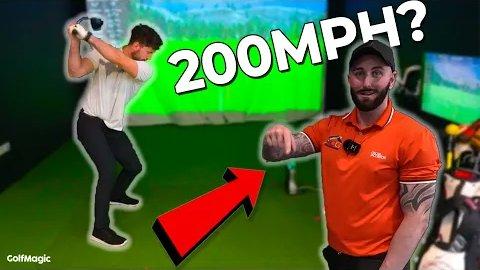 Bry Roberts is the biggest hitter in Europe on the Long Drive circuit. He took some time out to show Alex from GolfMagic what an intense speed training session looks like.

Roberts, who has won international titles and achieved ball speeds of 220 mph, told Alex that he would typically do two speed training sessions a week which last four hours each.

To begin putting Alex through his paces, Roberts wanted to see him hit three hard drives in order to get an understanding of his clubhead speed and ball speed.

As Roberts explained in the video below, the highest clubhead speed doesn't always correlate to a fast ball speed. Smash factor is also a key statistic.

Alex managed a clubhead speed of 126 mph and a ball speed of 178 mph at the start. But Roberts wanted to show us some simple techniques on how to loosen your muscles to gain higher speeds.

Alex used the SKLS Gold Flex Trainer aid which is a bendy club-like item. Swinging with this helps with your weight transfer and turning your body.

This aid helps to loosen muscles in your back too. Alex then swung a shaft without a head after this as fast as he could to fully open up his muscles.

Roberts then advised Alex to swing the shaft left-handed in order to accelerate the muscles that he wouldn't normally use in his right-handed swing.

After his training exercises, Alex's improvement was clear. By the end of the session, he achieved a clubhead speed of 135 mph and a ball speed of 192 mph.

He managed to break the 190 mph mark with Robert's Long Drive Autoflex shaft, which was 47 inches long. The video above is an eye-opening insight into the life of Long Drive competitors.

Next Page: Rory McIlroy loses moe ground at Bay Hill - but he can still win...