The golf club that compensates for bad skills

This mechanical golf club can ensure you hit the ball to your desired distance. 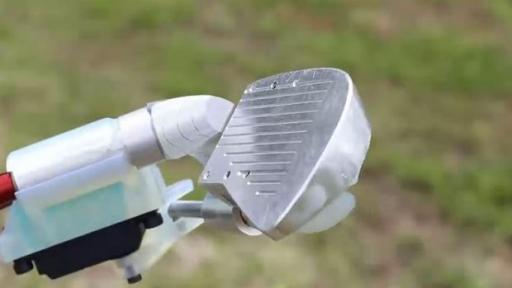 For some golfers, hitting the ball a certain distance can be a bit of a problem due to a lack of consistency in the swing. It causes frustration, anger and sometimes a few snapped clubs, so this engineer decided to do something about it.

Shane Wighton, an engineer who creates crazy inventions and uploads them to his YouTube channel, made a mechanical golf club that can be altered to any iron in the bag or set to go a certain distance, whilst adjusting the clubhead mid-swing to ensure you make the correct contact.

Now this was no simple creation, it took multiple designs and prototypes to get right. One of the designs used hydraulics to make the clubface angle change, but as clever as this was, it continued to break every time Shane hit a ball with it.

The two different modes both use a dial attached to the club. To select a certain club, Shane has to turn the dial to his desired club selection and the club will change its loft angle to match the club selection.

The distance mode was an even tougher task to work out for Shane. As he swings the club back, the club will use real time information -  calculated using Shane's average swing speeds inputted in the club mechanics - and the club will react in milliseconds to adjust the clubhead to get it not only at the correct lie angle for the required distance, but also in the right position.

The results aren't perfect yet and the club still requires some work, although Shane is going to have one or two problems with a few rules officials if he decides to stick this club in the bag...

NEXT PAGE: The world's BEST set to return for Charles Schwab Challenge