A statement will be released on Monday, but it seems Justin Rose has split with HONMA Golf. 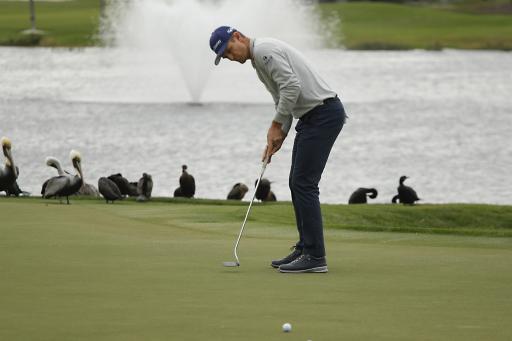 Justin Rose has been a HONMA Golf staff player for just over a year, but it's safe to say his form hasn't been quite what it used to and it now seems that his relationship with the Japanese brand could be cut short.

The former world No.1 signed with HONMA last January in one of the most bizarre equipment deals golf had seen for a long time.

Many people questioned whether Rose would be able to perform to the best of his ability using the Japanese clubs, but he quickly silenced the doubters when he won the Farmers Insurance Open just weeks after putting pen to paper.

It looked as though Rose had proved he could win no matter what equipment he uses, but he hasn't won since last January and his form has certainly been questionable.

During the Honda Classic, rumours of Rose leaving HONMA began to circulate when he was seen using a TaylorMade SIM driver and testing a few other clubs too.

Well fuel has most definitely been added to the fire, when GOLF.com's Jonathan Wall tweeted a photo of Rose's bag during his practice round for this week's Arnold Palmer Invitational and there wasn't a single HONMA club in sight.

Wall also stated that he spoke with HONMA and we can expect a statement from both parties on Monday.

Spoke to Honma this morning and, out of respect for Arnie’s event, was told there won’t be an official comment until Monday. Expect statements from Honma and Justin Rose at that time.

"Spoke to Honma this morning and, out of respect for Arnie’s event, was told there won’t be an official comment until Monday. Expect statements from Honma and Justin Rose at that time," tweeted Wall.

Rose, who is currently playing in the first round of this year's Arnold Palmer Invitational, has taken his HONMA TR20B irons out and gone back to his old TaylorMade P730 irons.

The Englishman is using the new TaylorMade SIM driver and a TaylorMade M6 3-wood and 5-wood.

Rose is reportedly carrying three wedges, two of which are the HONMA TW Rose Prototypes, while his lob wedge is a 60 degree Titleist prototype.

More news will come on Monday once HONMA has released an official statement.