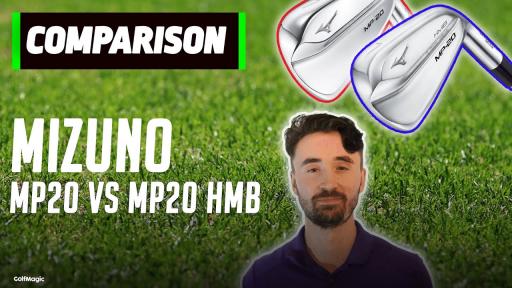 Mizuno is one of the best iron brands on the market, with the Japanese manufacturer being known for creating aesthetically beautiful irons that perform incredibly.

With that being said, the Mizuno MP20 and MP20 HMB irons certainly have that wow factor that you're looking for, but which one is better suited to your game?

Watch the video below as GolfMagic's Alex Lodge puts the sibling irons from Mizuno up against each other at Knole Park Golf Club.

This pure muscleback’s ‘tour-ready’ profile has been honed by studying elements of Mizuno’s most played/retained tour iron models by both contracted and non-contracted tour players, with usage among the tour’s new breed of ‘free agents’ adding a new perspective. A discreetly tapered topline and cambered sole allow a fuller spread of weight to enhance vertical stability and forgiveness on strikes from high or low in the face, while retaining a traditional muscleback appearance.

The topline has been refined in response to tour player preferences and is Mizuno’s thinnest among recent generations of MP irons, while the blend of satin and mirror chrome finishing has been engineered to eliminate areas of high glare in the playing position.

The MP-20 HMB offers a full set of performance hybrid irons in a sharp ‘tour-ready’ profile, built on the ball speed of Mizuno’s Chromoly material in the face and neck, supported by a precision stainless steel body and tungsten weighting. It offers the proportions, topline and offset transition of a classic Mizuno players’ muscleback with a generous sole width that’s hidden at address, and is designed to help consistent players pursuing added ball speed without sacrificing their shot-making options.

The heads feature a brush satin durable plated finish and a complex, loft-specific construction. From 2-to 8-iron, Mizuno’s multi-thickness Grain Flow Forged Chromoly face and neck is dialled in to be consistently hot across the clubface. From 2- to 7-iron, twin 12g tungsten weights deliver stability and an easy launch, while use of a softer 1025E Pure Select mild carbon steel from 9-iron to PW makes the short irons soft and responsive. MP-20 HMB is designed to be played as a full set or mixed with any MP-20 set, with recommended break points between the 4- and 5-iron or 7- and 8-iron for blended sets.

These sibling irons from Mizuno are no doubt one of the best looking irons available on the market right now, which is unsurprising as everyone expects that from this top iron brand.

If you're a mid-to-high handicap golfer then you're most likely going to be better suited to the MP20 HMB as they have a slightly thicker profile and are packed with a lot more forgiveness than the MP20's.

For those of you off a lower handicap with a strong iron play, you're probably going to lean towards the MP20's as they are better suited to players who don't seek much forgiveness and place a premium on workability and shot haping.

The MP20's are actually £30 cheaper per club than the HMB's which did come as a surprise. We think the MP20's are very well priced compared to similar irons on the market, whilst the HMB's are probably a little expensive given that they're for the higher handicap player.

For more details on these irons, make sure you watch the video above where Alex puts them both to the test. If you enjoyed the video, help us out by hitting the like button and subscribe to our YouTube channel to see even more of our content.