PING elevate forged iron design with launch of i59 irons

The new PING i59 irons have been introduced to deliver look, feel and control preferred by better players. 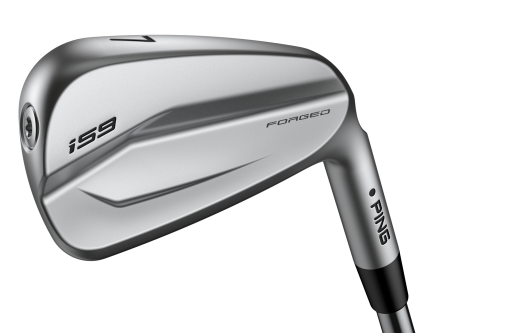 PING have introduced the i59 irons, a forged blade that delivers the look, feel and trajectory control preferred by better players with unprecedented forgiveness in blade-style designs.

An aerospace-grade aluminium insert allows approximately 30 grams of material from the centre of the club to be redistributed to the perimeter, some in the form of toe and shaft tip weights, elevating the MOI to match that of the larger PING i210 iron.

The result is a forgiving, forged iron with a crisp, solid feel at impact that delivers lower launch and trajectory control with the precision expected from a blade design.

The precision-machined face has new MicroMax grooves for tighter spacing and a geometry that results in an average of four extra grooves on each club to reduce fliers in the short irons and preserve spin in the long irons for greater control and consistency.

Joining the 1025 carbon steel forged body, aluminium insert and laser cut 17-4 stainless steel face employs a forging process known as swaging, which creates a unibody-style part that is then plasma-welded to seal the seams.

"There’s been a lot of anticipation for the i59 iron since we took them out on tour a few months ago, so we're very excited to bring them to golfers around the world," said John K. Solheim, PING’s president.

"It's a true forged blade on the outside, but inside it’s like nothing ever engineered in golf equipment. Our team took on the challenge of disrupting an iron category that traditionally has lacked a lot of performance innovation and developed an iron unlike any other."