We put two of the latest drivers up against each other through a variety of testing. 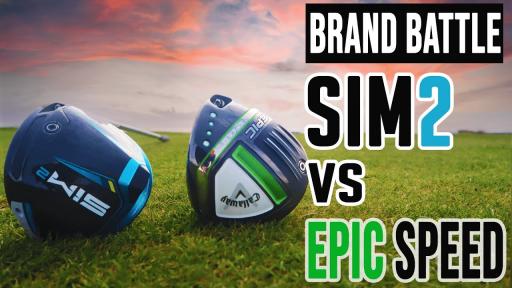 The TaylorMade SIM2 and Callaway EPIC Speed are two of the latest drivers to hit the market in 2021 and with some of the best golfers on the planet already putting them to good use, we wanted to put the drivers up against each other to see which one comes out on top.

In our first brand battle of 2021, our equipment guru Alex puts the TaylorMade SIM2 up against the Callaway EPIC Speed at the Swing Suite through a variety of testing, such as looks, feel and performance.

WATCH THE BRAND BATTLE IN THE VIDEO BELOW:

With any driver on the market, data is going to change depending on who is hitting the club, so in our brand battle, we ensured we focused on more than just the numbers behind the drivers, but also our opinion on looks and feel.

In terms of looks and design, the TaylorMade SIM2 and Callaway EPIC Speed offer something very different and it will come down to personal preference when choosing which one you think looks better.

The EPIC Speed has a far more classical design compared to other recent Callaway drivers, such as the BB21 and the MAVRIK, but it's been built based on the evolution of the previous EPIC model released a few years ago.

The SIM2 is certainly the louder-looking driver between the two, with a more 'in your face' style that stands out in your golf bag. The new driver from TaylorMade looks more modern than Callaway's and if anything, slightly futuristic.

Like we mentioned, these two drivers look completely different, but GolfMagic prefers the aesthetics of the TaylorMade SIM2.

Again feel is another area where these two drivers offer something completely different to one another and it will rely on your personal preference as a golfer.

The SIM2 driver feels heavier in the club head, which gives you a little bit more feel throughout the swing. If you take the club head back with an open face, the weight allows you to feel this and rectify it on the way down, while the EPIC Speed feels more balanced, which some golfers will prefer, but it can leave you guessing a little with your club head position.

The EPIC Speed also felt a little smoother off of the club face but it wasn't as responsive as the SIM2, meaning when you don't hit the ball out of the middle of the face, you know about it with the SIM2, whilst Callaway's latest driver feels very similar no matter where you strike the ball.

Dispersion and data will be something that causes different results depending on who is using the driver and what shafts they are fitted with, but let's sumarise Alex's results when putting the two up against each other.

The EPIC Speed had a slightly better dispersion rate but it was very close, so when it came to finding fairways, the Callaway driver performed ever so slightly better.

What was disappointing was the inconsistency in the spin rates using the EPIC Speed. It's meant to be Callaway's fastest driver ever, but that only seemed to be the case when you struck the ball right out the middle and the change in spin rates on off-centre shots was pretty drastic, reaching an rpm of up to 4000.

The SIM2 produced really consistent data in terms of yardage and spin, even when the ball wasn't quite struck out the middle of the face, the spin rate didn't stray too far from its optimum number.

In the longest drive competition, the SIM2 driver edged it by a few yards, but like we said before, these results may be different with different golfers, swing types and swing speeds.

For a full in-depth analysis of the brand battle, make sure you watch the video attached to this article and help us out by hitting the like button!