Which wedge will win the spin test out of TaylorMade MG3, the PING Glide Forged Pro and the Callaway Jaws Full Toe? 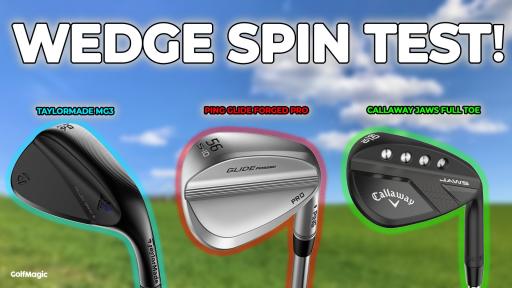 Alex from GolfMagic has had the pleasure of testing the best golf wedges on the market right now, but which one of them produces the most spin from around the greens and off the fairway?

The TaylorMade MG3, the PING Glide Forged Pro and the Callaway Jaws Full Toe are top-class wedges that have been produced by top-class brands.

Alex hit eight balls with each club and he began with the Callaway Jaws Full Toe wedge, which produced a consistent spin rate.

This is a key feature which you should look for when buying a wedge: Is the RPM (rotations per minute) similar with each shot?

As we discovered, Alex's average RPM with the Callaway wedge was 8786. What was also pleasing was the dispersion of all eight shots with this club.

Each ball travelled and landed in similar areas and as well as spin, this is another feature that you need to consider when buying a new wedge.

Alex moved on to the TaylorMade MG3 wedge which has an aesthetically pleasing design. It is one of our favourite wedges this year and it produced a higher average RPM than the Callaway Jaws Full Toe wedge.

The MG3 wedge averaged 8886 RPM and Alex's average distance with this wedge was 120 yards. The dispersion wasn't as impressive as the Callaway wedge, this may mean it is a less forgiving club.

Which wedge spins the most? ⛳️

The PING Glide Forged Pro is the most expensive of all three wedges and it also won the spin contest with the highest average RPM, coming in at 9038.

Clearing the 9000 RPM mark is significant because this club has a smaller head and it is far less forgiving than the MG3 or the Jaws Full Toe wedges.

The PING Glide Forged Pro wedge will suit better players because it punishes off-centre shots more than its opponents in this spin test.

The yardages were less consistent, as was the dispersion so this is more evidence to suggest that the PING wedge is a harder club to hit.