Alex from GolfMagic took the TaylorMade 300 Mini Driver and TaylorMade SIM2 Driver to Mannings Heath Golf and Wine Estate to compare their qualities. 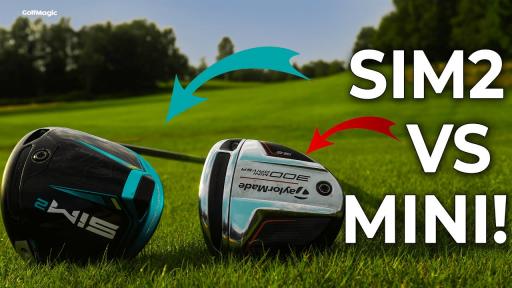 TaylorMade recently announced the release of the 300 Mini Driver, a club that they brought out two decades ago which is as popular now as it was then.

Alex from GolfMagic took it and the TaylorMade SIM2 Driver to Mannings Heath Golf and Wine Estate to test their qualities and practicality in a golf bag and on the course.

The SIM2 Driver is our favourite driver of 2021, but the 300 Mini Driver has a lot of mutual features which make it such a good club.

Related Articles
Nike Golf has the BEST golf shorts for you to grab this summer!
FootJoy's Blues Collection is perfect for your game this summer!

Both clubs have a Carbon Crown and a speed pocket located in the head of the club. They are also both adjustable, but the SIM2 Driver is more advanced with a forged aluminium back ring.

The Mini Driver was re-released with a smaller 307cc head and a 13.5-degree face, while the SIM2 Driver is much more powerful and has less loft.

A key advantage that Alex found with the Mini Driver is its versatility and forgiveness. No matter what golfing ability you have, this club will act like a 3-wood and help you hit consistent shots.

Having both of these clubs in the bag would be an ideal situation. The power and sleekness of the SIM2 Driver and the versatility of the 300 Mini Driver can cover the top end of your bag and provide reassurance in your long game.

The SIM2 has the potential to provide you with long and straight drives, while the Mini Driver can do that as well and act as a utility club for your long game.