Billy Horschel is a big West Ham fan and he is often seen on the PGA and European Tours with his Hammers golf bag. 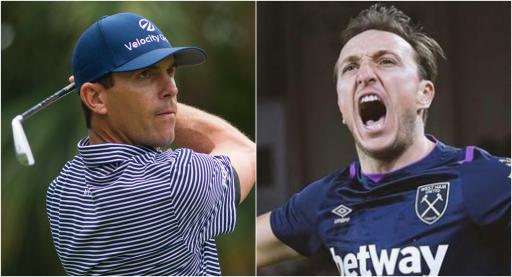 Billy Horschel created an unforgettable moment for a group of golf fans (and football fans) in Dubai this week when he spoke to a special person on FaceTime.

A loyal gathering of West Ham fans greeted Horschel at the Earth Course while he was practising for the DP World Tour Championship, so the 34-year-old rang up West Ham legend Mark Noble on his phone.

The fans were both thrilled to speak to Horschel and then to Noble on the phone. The fans certainly earned this special moment following their support of Horschel in the Middle East.

It looked as though Horschel was as excited as the fans to speak to Noble, who sounded as though he had just returned home from training. The 34-year-old has played for West Ham over 400 times in the Premier League and scored 46 goals.

He and his Hammers teammate Declan Rice were at Wentworth to watch Horschel win the BMW PGA Championship in September and the trio dined together after the final putt was holed.

Horschel's love of the London-based club stems from watching 'Green Stree Hooligans', a popular film about hooliganism in football which was released in 2005.

"This is how an American becomes a fan of West Ham United. When I was in college in my sophomore year, I just got a new TV and my cable wasn't getting turned on for a couple of days," said Horschel, earlier in the 2021 season.

"I bought some DVD's and one of them was a movie called Green Street Hooligans. It had Charlie Hunnam and Elijah Wood and it was about the firms for West Ham and Millwall, and that whole aspect of beyond the football side of it.

"I just fell in love with it and I watched that DVD over and over and over and we literally just watched it at the PGA Championship - I've been a Hammers fan for over a decade and it's been fun to see the success they've had this past season."

Horschel is ranked second in the Race to Dubai behind Collin Morikawa and he is one of just six players who can win the season-long points award.

Much like his major-winning compatriot, he will be looking to become the first American winner of the Race to Dubai.

NEXT PAGE: "I'M NOT AFRAID OF ANYONE": PGA TOUR CHAMPION TO BEGIN COURSE REPORTING ROLE