Collin Morikawa is currently ranked at number two in the world and he won The Open Championship at Royal St. George's. 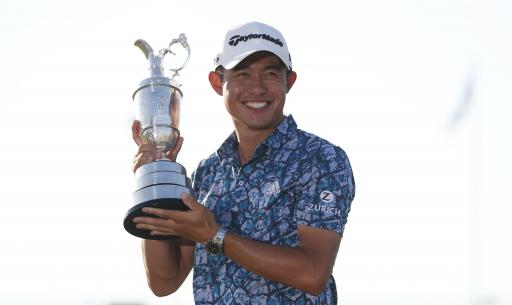 Collin Morikawa has been awarded Honorary Life Membership on the European Tour in recognition of his debut Open Championship victory at Royal St. George's in July.

The American, who goes into this week’s season-ending DP World Tour Championship as leader of the European Tour’s Race to Dubai, lifted the Claret Jug at the first attempt with a two-shot victory over his Ryder Cup teammate Jordan Spieth at Sandwich.

It was the second time he had captured one of golf’s four major championships in his first appearance, having also claimed a debut win in the 2020 PGA Championship at TPC Harding Park in San Francisco.

Morikawa, who also won the WGC-Workday Championship at The Concession in February, will this week hope to round off a fine individual season by becoming the first American winner of the European Tour’s Race to Dubai.

RELATED: GOLF BETTING TIPS: COULD THIS 90/1 SHOT CAUSE A SHOCK AT THE RSM CLASSIC?

European Tour Chief Executive Keith Pelley presented the 24-year-old with his Honorary Life Membership card on the eve of the final Rolex Series event of 2021, with Morikawa becoming just the 57th player in the Tour’s 49-year history to receive the accolade.

He is also the fifth American to be given Honorary Life Membership, following in the footsteps of Arnold Palmer, Jack Nicklaus, Tom Watson and Patrick Reed.

"Two and a half years ago when I turned pro, I had no clue what life was going to put in front of me, but I'm very thankful for what I’ve been able to accomplish," said Morikawa.

"Obviously the world has gone through many changes, but this means a lot and I have to say thanks to the European Tour.

RELATED: "IT'S ONLY HARDENED MY DISAPPROVAL": RORY MCILROY SAYS OF GREG NORMAN'S VENTURES

"We want to grow the game as much as we can, and this is an important piece of that. So I'm going to honour this and this is going to be very special and it is definitely a top highlight so far since turning pro, so thank you."

"On behalf of everyone on the Tour, I would like to officially welcome Collin into an illustrious group of players to receive Honorary Life Membership of the European Tour," said Keith Pelley, European Tour Chief Executive.

"Collin is an incredible talent and he has already accomplished so much in the game at such a young age."

european tour
honorary life membership
collin morikawa
patrick reed
Race to Dubai
Previous
Golf Betting Tips: Could this 90/1 SHOT cause a shock at the RSM Classic?
Next
PGA Tour: How to watch the RSM Classic and Round 1 & 2 tee times