"What a strike that is": Tyrrell Hatton THROWS more clubs on European Tour

Frustration got the better of the Englishman again, who admitted he almost missed the ball with one of his tee shots. 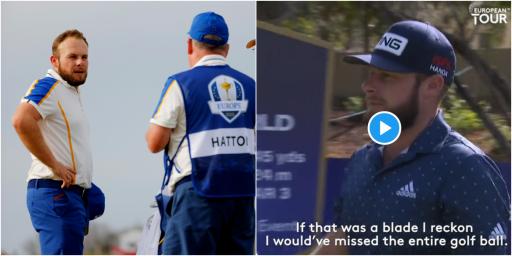 Tyrrell Hatton appeared to let the frustration get the better of him again by chucking clubs at the DP World Tour Championship.

At the final event of the year on the European Tour on the Earth Course at Jumeirah Golf Estates in Dubai the Ryder Cupper got a little bit upset with some of his ball striking. Hatton is no stranger to temper tantrums on the course having adopted the moniker of the angry golfer.

Hatton got annoyed with himself at the long, par-3 4th hole. Measuring at 245 yards, it is the type of hole that would strike fear into the heart of amateur golfers. But Hatton is one of the best players in the world, and prides himself on his excellent ball striking.

This tee shot? Not so much. At least that's what Hatton though of it. "What a strike that is," he said as he lightly lobbed his club to towards the pristine grass on the tee box. It's not the first time he's done something like this, and it's likely it won't be the last.

NEWS: PGA TOUR DEBUTANT "NOT AFRAID OF ANYONE"

"That deserved to actually plug and never be seen again," Hatton said. "If that was a blade I'd reckon I'd actually miss the entire golf ball." Not too pleased with that one then, Tyrrell? Hatton was also caught dropping clubs at other moments of frustration in his round.

Hatton has played on his persona as the angry golfer before. He starred in one of the European Tour's amusing social media videos as he sat with Tommy Fleetwood leading a counselling session for other angry golfers. Perhaps he needs some more treament?

Hatton went on to bogey the hole, adding to his displeasure. A double bogey at the par-3 6th followed to only deepen the woes as he made the turn at level par on the final event under the name of the European Tour before the rebranding next year.

Rory McIlroy set the pace on day one as he signed for a 7-under 65.

MORE: FLEETWOOD OPENS UP ON STRUGGLES

MORE: HOW LEXI THOMPSON CAN REBOUND FROM PLAYOFF LOSS