Tiger Woods set to feature at 2022 Presidents Cup, according to Davis Love III

"His role is whatever his role wants to be. If Tiger calls me up and says, ‘Hey, you’re kicked out, I’m taking over,’ that’s Tiger’s role." 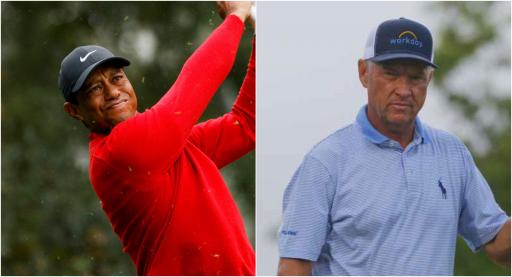 Davis Love III refused to rule out Tiger Woods from a role in captaincy for the 2022 Presidents Cup at Quail Hollow Golf Club.

Woods participated as a playing-captain in 2019 at Royal Melbourne Golf Club where the USA narrowly beat the International side 16-14.

RELATED: TIGER WOODS REVEALS INDUSTRY TOP SECRET - DID YOU KNOW ABOUT THIS ONE?

Love is the captain of the US team next year and he revealed that he had spoken to Woods about the captaincy role prior to his car accident in February. The 15-time major winner wanted to make the playing team instead of watching them.

Love is no stranger to being a senior figure on American sides in golf's team events. He has experienced both success and defeat in each of his appearances as captain of Team USA at the Ryder Cup.

RELATED: PGA TOUR: HOW TO WATCH THE RSM CLASSIC AND ROUND 1 & 2 TEE TIMES

"It would have been a great captaincy for Tiger to continue on,” said Love, speaking ahead of the RSM Classic, an event he is the host of.

"At the time we were discussing it, he said, ‘No, I’m playing really good, I’m gonna make the team, and I enjoyed Australia being playing captain, but I want to be a player on the team.’

"So, his role is whatever his role wants to be. If Tiger calls me up and says, ‘Hey, you’re kicked out, I’m taking over,’ that’s Tiger’s role.

"If he wants to be an assistant, you know, I would hope that he comes back and starts playing and can make that a goal, to be on the team. He was a big part of our Ryder Cup."

From the outside, Woods acted as an adviser to the US team and encouraged the players to step on the necks of the European team at Whistling Straits, which is certainly what happened.

Woods was an assistant captain to Love at the 2016 Ryder Cup which America won. The 82-time PGA Tour winner has been a part of nine Presidents Cup sides.

It is highly unlikely that Woods will be on the playing team against the Internationals by the time September 2022 rolls around, but Love also described the bond and engagement that Woods has had with the players that played at the 2021 Ryder Cup.

"It took us a while to get him to the point where he would engage. He had a rough start to the year, but once we got him in the loop, he was a big help and a lot of fun for the Ryder Cup and for the team," Love added.

"Obviously the guys were going to see him down there in south Florida all summer, but leading up to the Ryder Cup, obviously he had a watch party at his house. He can do whatever and I know he’ll be a big part of it."

Love, a PGA champion and 21-time PGA Tour winner, has certainly opened the door for Woods to feature at Quail Hollow, which will no doubt have golf fans extremely excited.

NEXT PAGE: "IT'S ONLY HARDENED MY DISAPPROVAL": RORY MCILROY SAYS OF GREG NORMAN'S VENTURES