"I thought not today, not Sunday - you are leading the frigging event" 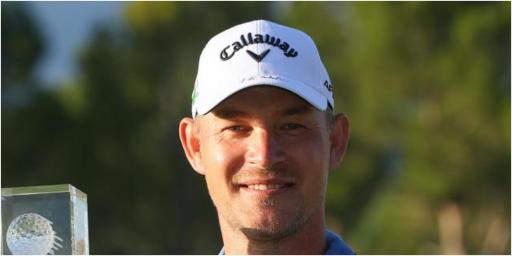 The European Tour's latest winner has revealed he almost missed his Sunday tee time because he got stuck in a toilet.

Jeff Winther put in a nerveless performance last week as he claimed the Mallorca Golf Open.

In an extremely competitive final round at Golf Santa Ponsa the Danish golfer held onto his 54-hole lead to win by one stroke.

But the 33-year-old had a nightmare start to his Sunday morning when he got stuck in the bathroom at his hotel for around 45 minutes.

Rory McIlroy on Dubai Desert Classic return: "It's a comfortable place for me"
Collin Morikawa had "no clue" where the ball was going in Abu Dhabi

Leading the tournament heading into the final round but locked in the toilet...

"After breakfast I went to have a shower and my wife came in to a trip to the toilet as well and the door closed...there's no lock," he said.

"We locked ourselves in...there's no lock on the door but the handle didn't work.

"So our little girl, she's six years old had to go and find some guys in reception and then break down the door.

"I thought jeez, not today, not on a Sunday you're leading the frigging event, you might not get there for your tee time.

"Oh, what a morning that was."

Winther told the European Tour's official website that he thought the whole fiasco might have actually settled his nerves in the end.

The Dane shot a level-par final round to claim his first ever win on the European Tour.

RELATED: SHOULD DJ BE ASHAMED OF WANTING SAUDI RICHES?

RELATED: PLAYER TRIES TO EMULATE DECHAMBEAU BUT IT GOES WRONG

NEXT PAGE: DAD PUSHES A PRAM ON GOLF COURSE AND GETS PRAISE