Former European Tour professional Andrew Murray explains the perfect drill to get you out of greenside bunkers. 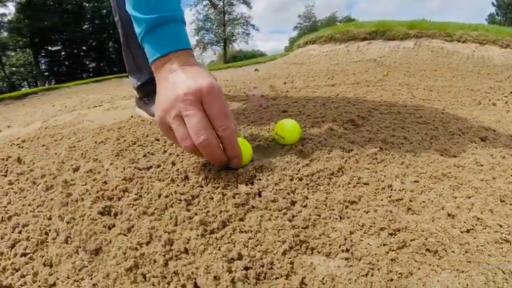 As golf is one of the few sports that has resumed post-lockdown, Lexus asked its ambassador, PGA professional golfer, coach and BBC pundit, Andrew Murray, for some tips to help golfers get back into the swing of things.

The 1989 European Open winner has revealed a simple and effective drill to help you get out of greenside bunkers with ease, so watch the video below as Murray explains the two-ball oval drill for you to try next time you're practicing.

“A lot of players are intimidated by a greenside bunker shot, but there’s no need to be. First of all, it’s really important you’ve got a good club. The key to this is to try and splash the parcel of sand onto the putting surface from just behind the ball. Practice the tips in this video and you’ll be able to make some great escapes," said Murray.

HOW TO ESCAPE A GREENSIDE BUNKER

Club choice: The first step is a simple one but many amateur golfers approach bunker shots with the wrong club in their hand. In a greenside bunker, it's crucial to use sand or lob wedge to make sure the ball can fly out of the bunker with enough height.

Two-ball print: When you're practicing your bunker shots, press a golf ball into the sand behind the ball you're going to hit and another behind that, leaving two ball marks.

Oval: With your finger, draw an oval around the two ball marks and your golf ball.

Splash the sand: Commit to the shot and splash the oval of sand towards your target with an open club face. Wwith the right amount of speed and conviction, the ball will pop high into the air and towards your intended target.