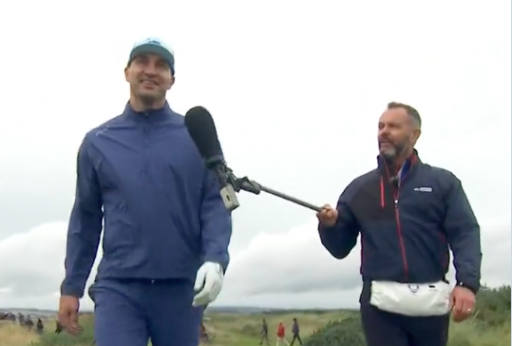 The Alfred Dunhill Links Championship is one of the few events in golf that combines the abilities of both tour professionals and amateurs as part of a team.

The professionals will be competing at St. Andrews, Kingsbarns and Carnoustie in the individual event, which was won by Victor Perez in 2019.

It is a great week in Scotland where we meet many different celebrities from the world of sport and entertainment, and one contestant is none other than former World Heavyweight champion boxer Wladimir Klitschko.

The Ukrainian, who plays off a handicap of 19, is competing in the event after watching his countryman Oleksandr Usyk break the hearts of British boxing fans by beating Anthony Joshua last weekend.

Klitschko is playing alongside Maximilian Kieffer in the team event and after 54 holes, they will be hoping to be one of the 20 teams to make the cut.

"I'm so happy that I'm not doing it for a living"

The German Kieffer came very close to winning his first European Tour event in 2021. He lost in a playoff to John Catlin at the Austrian Open and he also came second at the Gran Canaria Lopesan Open.

"I am so happy that I don't do golf for a living, so happy! I am enjoying myself and when I see the pro's, in some conditions they are struggling, some shots are great and some aren't," said Klitschko, talking to Andrew Coltart from Sky Sports Golf.

"The difference between an amateur like me and a pro, the pro's make mistakes like amateurs and this makes us amateurs feel so good! I am sorry to the pro's, apologies to all of the pro's out there."

RELATED: ROBERT MACINTYRE: PADDY CALLED ME BEFORE RYDER CUP - NOW I WANT TO PLAY IN ROME

I think Klitschko speaks for us all when we see a top professional golfer make a mistake, as it reassures us that even the best players in the world can have a bad day.

The former fighter described St. Andrews as 'the Mecca of golf' and he felt honoured to play at the famous venue, which will host the 150th Open Championship in 2022.

It would be great to see Klitschko and Kieffer play well this week, as well as the many other celebrities who will inevitably make some great headlines this week as well.

NEXT PAGE: THE BEST PETER MILLAR OUTERWEAR ITEMS FOR YOUR WINTER GOLF GAME!