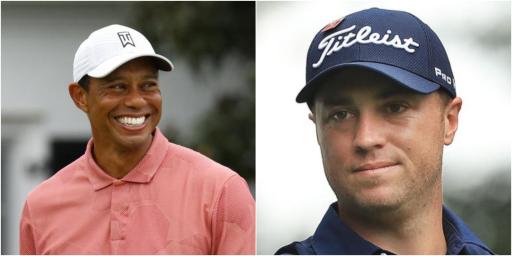 Justin Thomas has revealed Tiger Woods is still his "sarcastic a**hole self" and believes the big cat is going to at least try and mount a comeback.

The 28-year-old PGA Tour sensation and Ryder Cup winner has been speaking to the popular No Laying Up podcast.

In a wide-ranging interview, Thomas spoke about his career, the emphatic win at Whistling Straits, his own mental health issues and what it's like having Jim "Bones" Mackay back on the bag as well as Woods.

Of course, Thomas was asked about the status of Woods, how much he sees of him and what he rates his chances are of making it back to playing again at some point in the future.

Go Crazy! Big point for the duo at the Presidents Cuppic.twitter.com/AWYLDWXPL5

Thomas revealed that he sees Woods at least two or three times a week when he's home and their dogs play together.

"He's doing well especially all things considered," Thomas told the podcast before explaining that every day for Woods at present is like Groundhog Day. "Every day is exactly the same for him," Thomas added.

Asked about Woods' comeback chances, Thomas said: "I don't know. I know that he's gonna try. I don't see him ever playing if he can't play well. He doesn't strike me as a guy that's like, y'know, he's played at home shooting a bunch of 75s and 76s and he's like, 'alright, I'm gonna go give Augusta a try this year', that's just not gonna be him."

“Sweet, good talk. Thanks!” - @JustinThomas34 to a distracted @TigerWoods. pic.twitter.com/RXX8Q9iZJV

He added: "I know how determined he is and I know he is going to at least try and give something again. I mean, obviously I hope he does. But at the same time, like I said after the accident, as long as he can be a dad and be normal with that again that's the number one priority and the rest is a bonus."

Thomas added: "Even if it's something like when he's feeling good again he just goes and rides around with Charlie at the father/son. He wants to be a dad and enjoy those moments with him and hopefully watch him potentially be playing and go watch Sam in her soccer tournaments."

He concluded: "His competitive side... like you said, is not gonna let him just hang it up without at least giving it a try at some point."