Weight sessions and range lessons under the lights - these two are taking The Match seriously. 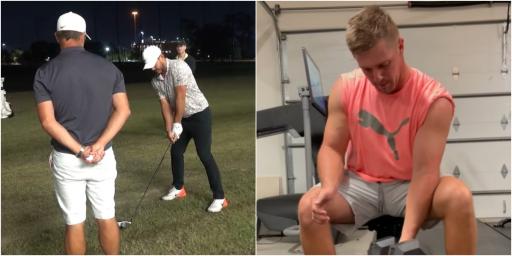 We are only days away from the fifth edition of The Match where Brooks Koepka will take on Bryson DeChambeau.

And it's fair to say the frenemies are taking this seriously as both appear to be grinding extremely hard off the course.

"While he's too busy lifting beer cans...", DeChambeau, 28, jokingly posted on Instagram next to a video of him doing bicep curls.

His post was a direct response to Koepka who recently posted a video promoting the lager brand Michelob Ultra.

The 31-year-old lifts light beer cans and suggests he's got the ULTRA workout plan ready for The Match on 26 November in Las Vegas.

But while we all know this is just an advert promoting lager, Koepka has been putting in some serious work off the course on his game.

He's playing the Houston Open this week on the PGA Tour and was filmed by the official PGA Tour getting a lesson under the lights.

Koepka rips driver and appears to be working on his hip rotation.

The fact he's putting in so much work on his golf swing is at odds with previous comments Koepka has made.

He has previously suggested he only likes to practice hard before the majors.

Well, it certainly looks like he is working extremely hard to make improvements.