Is Bryson DeChambeau UNFAIRLY CRITICISED on the PGA Tour?

Bryson DeChambeau will always have his critics, but he is just on his own path. 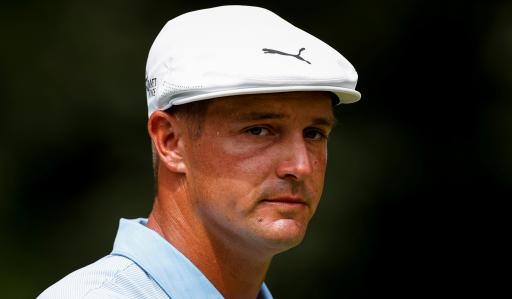 I have a little sympathy for Bryson DeChambeau.

You might think that strange considering he’s a multi-millionaire golfer who divides opinion.

But I do think he is unfairly singled out on the PGA Tour by players, commentators and fans alike.

WATCH: BRYSON CALLS OUT CANTLAY FOR WALKING ON HIS SHOT!

He hit the headlines again in recent days when he appeared to get grumpy with Patrick Cantlay at the BMW Championship on Sunday.

DeChambeau, 27, came out of his address and asked Paddy Ice to ‘stop walking’ during their epic playoff.

Cantlay, 29, admitted afterwards it was a non-story as he had been told by an official to speed up.

Therefore, it could be construed as a mountain out of a molehill.

He ultimately lost on the sixth playoff hole in a PGA Tour event for the ages.

Bryson took time to fist-bump juniors and even gave one young fan his famous hat earlier in the week.

A ball from @B_DeChambeau left this kid in pure disbelief. pic.twitter.com/ct6QFpzRs3

He rightly had some choice words for a spectator who made an unsavoury comment towards him.

His critics will suggest he should not shun the media afterwards.

Don’t bite the hand that feeds you, they’ll say.

But it’s easy to forget DeChambeau is still a young man who has perhaps lived in a bit of a bubble.

I would suggest he is a man of wealth who has only ever known what it’s like to be a top athlete.

I say that purely for context, not to try and garner sympathy.

That world consumes you and it can be grinding.

Rory McIlroy admitted before the BMW Championship he was just trying to make it on through.

His energy levels were depleted, he said.

When your words are misconstrued or even fabricated that will annoy anyone.

DeChambeau has always known he would be unique in the golf world from the age of 12.

PGA Tour winning coach Mike Schy, who has known Bryson from that age, had some interesting thoughts.

He told the bunkered podcast recently that his star pupil asked him where he thought his career would lead.

“I said that, for him, there would always be a problem,” said Schy.

“You could win six or seven tour events, maybe even win a major or be number one in the world, but people are still going to look at what you do as an anomaly.

“They’re going to look at your swing, the clubs, the grips and that stupid hat that you wear, and notice that you’re a little different because of how you approach the game.

“People are going to look at those things and not like it.

“I warned him there will be naysayers. It shouldn’t be that way because, if it was Tiger, the whole world of golf would change in a second. It’s just not going to be that way for Bryson.

“There are too many elements that are so out of the norm that it’s going to take a long time for people to get used to it. Lo and behold, look at where we are.

“He recently asked me why there wasn’t a mile-long queue of people wanting to be coached by me. I told him that it is because they still think we are crazy.”

In my view, there is nothing wrong with Bryson’s pursuit of being the best he can be.

Get bigger, hit it farther, dial in those wedges, putt using a metric system.

No problem for me, all within the rules.

There have been players that have broken the mould before and that will continue to happen.

Tiger Woods raised eyebrows when he started carrying it 300 yards off the tee.

The same has happened when Bryson smashes it over a lake carrying 400.

Maybe in a few years when Bryson has racked up more PGA Tour wins and probably a few more majors they will adore him just like they do the big cat.

Perhaps Bryson is the young pretender to Tiger’s throne?

Just keep doing what you are doing Bryson.

NEXT PAGE: DECHAMBEAU CALLS OUT CANTLAY FOR WALKING DURING HIS SHOT