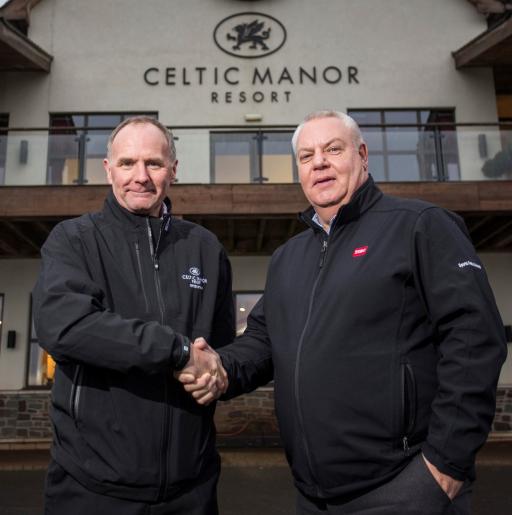 Celtic Manor's director of courses Jim McKenzie MBE has told GolfMagic he will be proactively campaigning against golf handicap-counting events such as medals taking place this year once the coronavirus lockdown has been lifted in the United Kingdom.

McKenzie, who acted as course manager when Celtic Manor hosted the 2010 Ryder Cup between Europe and the United States, explained maintaining all three championship courses (Twenty Ten, Montgomerie, Roman Road) is becoming increasingly more difficult with just a handful of greenkeeping staff working on site during the lockdown.

Getting a bit of early season top dressing done utilising fertiliser hoppers until ground conditions allow us to get traditional equipment on - onwards and upwards ! pic.twitter.com/Sly1Yfo8dv

"To say it's manic here is an understatement right now," McKenzie told GolfMagic.

"The entire Celtic Manor complex has shut down and we have just under 1,000 staff members furloughed. It's a complete shutdown so feels very odd to be out here with very people around.

"This is typically our busiest time of the year as we get our golf courses in prime condition for the summer, and then we look to maintain our courses for the winter season, which of course provides its own set of challenges.

"We should have 20 seasonal staff, but we are now down to the bare bones.

"Both our Roman Road and Montgomerie courses have got three greenkeepers and a gardener looking after all 36 holes, along with the driving range. This involves a lot of heavy manual work too, so it's becoming very difficult to keep on top of everything.

"Then on the Twenty Ten course, we have three greenkeepers and an irrigation engineer, and that's it."

As a result of the cutbacks that have had to be made during the COVID-19 lockdown, McKenzie has taken things into his own hands and jumped back into the hotseat.

"I've got back on a mower for the first time in a while," said McKenzie. "I'm back on the tools and learning how to use them all again. It's quite tricky as a lot of the models used today have changed quite a bit!"

Things were already tough enough at Celtic Manor prior to the lockdown given the deluge of rain the club received, and McKenzie admits that has provided his team with a "real challenge" to overcome.

"The biggest issue is that we had an inch of rain before even furloughing members of staff," he said. "We still have bunkers that have been destroyed from the winter storms at the start of the year.

"There are areas that need to be fertilised on the course, but we don't have the money to buy anything right now given there is no revenue coming in, and there is no membership revenue. There are no staff here to utilise such products so it's tough to get to work on certain parts of the course.

"The longer the lockdown goes on, the harder it is going to be, especially as we build up to the winter season. We are just trying to maintain the status quo."

In the eyes of McKenzie, when golfers do get back out on the golf course again, he recommends they will need to redraw their expectations somewhat as to what is acceptable on the course.

In an ideal world, McKenzie wants all handicap-counting tournaments to be scrapped until next season as soon as the lockdown is lifted in the country.

"There has not been much discussion about this in the golf industry, but when we speak about opening up golf again, I will certainly be proactive in campaigning against medals being played," said McKenzie.

Perfect weather conditions for an app of @HeadlandAmenity C Complex 5 2 10 this morning- literally the calm before the storm ! pic.twitter.com/XmoeP1JyKN

"I believe we will need to scrap all handicap-counting events. We don't need the pressure of our club captain phoning us up and saying 'this isn't good enough' or 'this needs to be done'.

"I believe we need some sort of leeway to get our courses back into a great condition, so I will be campaigning for just that.

"The immediate goal must be to get as many golfers back out on the course and enjoying the sport again, while of course adhering to correct social distancing measures that are being recommended by our governing body."

RELATED: BRITISH GOLF COURSES COULD REOPEN IN MAY

With news reaching us yesterday that Wales could become the first country in Britain to reopen its doors to the sport, McKenzie believes people's health must come first but that resuming golf would not be the worst idea in the world.

"I'm not sure what makes Wales so special to be singled out," jokes McKenzie, "but I do see both sides of the argument as to whether golf courses should remain closed or look to reopen.

"Denmark has opened up to four-balls now. My son, who lives in Dubai, told me this morning that three-balls are going to be announced over there as of tomorrow. They are also golfing again in Australia and in other parts of the world.

"Of course, people's health is most important and must come first, so we just have to do what the government feels right. I don't think it will be too much longer though until we see an ease in lockdown measures when it comes to golf courses being open again."

McKenzie does question, however, whether two-balls will be commercially viable for some of the biggest golf clubs in the United Kingdom given the social distancing measures that are likely going to remain in place over the coming months.

"I think some clubs will have to ask themselves whether two-balls are going to be commercially viable for them," said McKenzie.

"Maybe they would for us here at Celtic Manor, but I think we would have to wait and see. Some clubs such as The Belfry and Gleneagles might need to ask themselves whether they can cover their costs if only two-balls are allowed instead of three and four-balls?"

One-ball, two-ball, three-ball or four-ball, McKenzie is ready. Or at least will be within seven working days.

"I think with a week's notice, we could turn it around and get our courses into some kind of shape," said McKenzie.

"Then again, I think for the first month at least, golfers will just be happy to be knocking it around a ploughed field!"