WATCH: The time Charley Hoffman got an unbelievable break, undone by karma

Charley Hoffman hit the headlines last week, but for the wrong reasons. This great clip has surfaced from his unreal break in 2017. 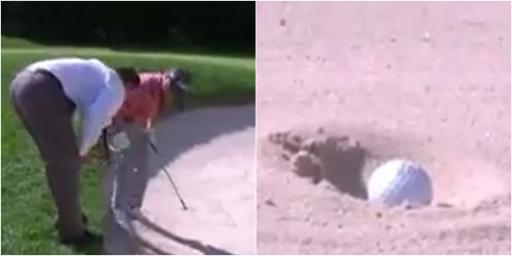 Charley Hoffman bizarrely hit the headlines after his rant about the PGA Tour last week.

In an extraordinary post, Hoffman claimed there was "no protection for the players at all" after a rules issue at the 2022 WM Phoenix Open.

Bryson DeChambeau and Phil Mickelson jumped on the rant. "I feel ya", posted Lefty. Brandel Chamblee then went all-in on Hoffman.

What was more remarkable is that Hoffman, 45, chose the week of the Phoenix Open to launch his extraordinary broadside.

As you may know he is sponsored by Waste Management. He always wears brightly coloured outfits giving them publicity this time of year.

I mean, what a week to drag your sponsor through the mud. Hoffman eventually apologised. Sort of. Or did he just get a call from the bosses?

Hoffman did make the cut at TPC Scottsdale, but finished in last place of the players who had made the weekend. He finished on 9-over.

Athlete unhappy with the direction a few blades of grass laid down at a sporting event (which is sponsored by a company that also sponsors him!) tags in an event run by the financial arm of a hostile government to protect him. I am absolutely howling.

This great clip surfaced. It takes us back to the final round of the 2017 RBC Canadian Open.

The journeyman pro had found the greenside bunker on the par-3 12th at Glen Abbey Golf Club.

In an horrendous plugged lie, Hoffman sought help from a rules official.

He complained his feet were touching a bunker liner which interfered with his stance. After a back-and-forth, he got relief.

Playing partner Kevin Chappell didn't appear to happy. "Hey, man, rules," Hoffman said. Chappell pointed out that he had a grin on his face.

When it came to playing the shot, Hoffman duffed it out and didn't even reach the green.

CBS analyst Dottie Pepper said: "Some could say, that might be karma".

The rule which allowed Hoffman to do this has since been changed so that players only get relief if their swing path is impacted by a liner.