Billy Horschel had to apologize for his outbursts of anger at the 2021 Masters. He let his temper get the better of him again at Augusta. 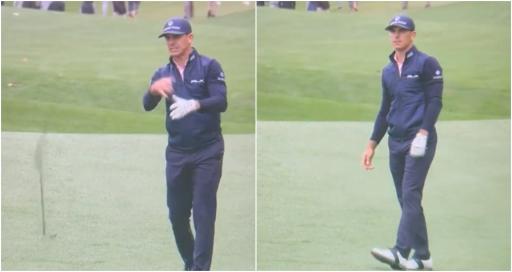 Billy Horschel once had to apologize after he let his temper get the better of him at The Masters. He might have to say sorry again.

Horschel was playing his third round on Saturday at Augusta National when he sent one flying straight into the water at the par-4 11th hole.

The American had done the difficult part by finding the short stuff at the long hole and was taking aim at the tricky pin position.

The only problem was when he made contact with the ball he had far too much draw spin and it went flying into the wet stuff. Cue rage.

When he realised what had happened, Horschel, 35, went for an unorthodox club toss. He smashed that thing straight into the ground.

He would go on to make bogey on the hole after getting up and down having taken the penalty drop. He did bounce back with a birdie.

Golf fans were quick to point out that Horschel has a history of letting his temper get the better of him at Augusta National.

Cast your mind back to the 2021 Masters and footage showed Horschel repeatedly smashing his wedge into his golf bag.

It was only a few weeks after he captured the WGC Match Play title and he was forced to issue an apology for his outburst.

"I am and have always been a fiery competitor," he said.

"Unfortunately, the fire inside me sometimes runs hot when I'm not getting the most out of my game.

"This leads to some instances where my conduct is not what I wish to show, especially as a role model to the younger generation.

"I apologize to Augusta National, the members of the club and to the patrons for any conduct that may have crossed the line.

"I am always trying to improve and do better; as a golfer, husband, father, or as a human being.

"Thank you [at] the Masters for a memorable week!"

Will he be issuing a similar statement this week?!