Butch on Tiger Woods' bromance with JT: "He wouldn't tell you a word!"

Butch Harmon says Tiger Woods will not be playing "on ceremony" if he decides to peg it up at The Masters. 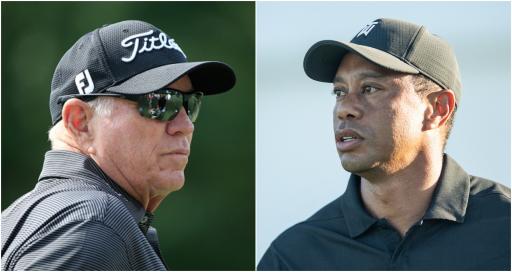 Tiger Woods' former coach Butch Harmon says his friendship with Justin Thomas is so close-knit even he can't get any insider information.

Speaking to Sky Sports, Harmon, 78, said Woods isn't just going to play so he can shoot 79-79 and have a "ceremonial walk around Augusta National".

News broke early last week about the fact Woods was mulling over the idea of potentially teeing it up at the 86th Masters on the 25th anniversary of his 1997 win.

It was remarkable story for golf fans. His plane was tracked heading to Augusta National. Rory McIlroy confirmed he saw him there.

Then there was radio silence from camp Woods until yesterday. At around 2.40pm on 3 April, Woods posted an update.

Woods confirmed he will continue his practice and preparation ahead of making a "game-time" decision over whether to play.

The 46-year-old was pictured clipping balls on the range for 20 minutes before playing the back nine. The Sunday stroll pictures went viral.

He reportedly stiffed his tee shot at 12 and made birdie. Woods also caught up with Billy Horschel and gave him a hug.

Harmon believes that Woods is not quite at the age where he will turn up "just to play". He says that will happen when he reaches his mid-50s.

Harmon told Sky Sports: "Whether he can win or not, I feel like if he can feel like he's capable of getting in the hunt, he will play.

"I don't think he'll play for the ceremonial walk around Augusta National."

Woods has always desperately tried to play down expectations and keep private his real progress.

Harmon lifted the lid on this by saying: "You know how Tiger's camp is, you get no insider information!

"I know JT [Justin Thomas] very well, who played him the other day, but I could call him up and ask him how Tiger played and he wouldn't tell you a word.

"That may seem ridiculous, but Tiger has never been any different and that's the way the camp has been.

"They don't really let out any information and they cover up things as much as possible, so we're really not going to know until we get confirmation from Tiger himself."