Sahith Theegala was pictured in tears after his challenge to win on the PGA Tour came to a cruel end. 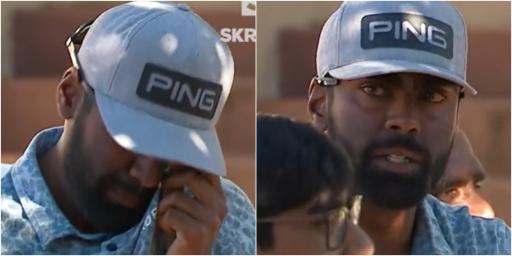 The tears were flowing for Sahith Theegala and Scottie Scheffler at the end of the WM Phoenix Open on the PGA Tour.

For Scheffler, they were tears of relief. Of joy. Of overwhelming emotion. That breakthrough win finally came for the 25-year-old.

Yet for Theegala they were for what could have been. While the talk in golf lately has been about money, Theegala's emotions remind us what it's all about. Or what it should be about. Are you watching Greg Norman?

Theegala did not blow this. In fact, it was a cruel twist of fate that saw his charge towards the title fade away. He had taken everything five of the world's top-ranked golfers had thrown at him all week and was still standing.

At 17, Theegala sent his tee shot towards the green. It had a little too much heat, caught the green on the low side and cantered off into the water. His head was scrambled. His demeanour had changed.

While it may be too soon to suggest that a star is born, Theegala, 24, showed talent beyond his years. There is a spark about this young man.

Through tears, he explained his emotions after being asked if he was proud or disappointed.

"A little bit of both, sure. I thought I -- sorry. I thought I hit a great shot on 17. It was cutting. As long as it's another yard right, I think that's perfect. Kick straight and it's good. Kicked left into the water there," he said.

"But definitely proud of the way I played this week."

Love his game, love the emotion. @SRTheegala made a ton of fans this week @WMPhoenixOpen. pic.twitter.com/xJWwqsgaiw

Theegala said he felt he and his caddie Carl did a really good job of managing the emotions and adrenaline.

Even down the stretch when the heat was on Theegala was revving up the 20,000-strong crowd at 16 after his tee shot.

Earlier in the week, he spoke of being starstruck playing alongside Brooks Koepka and Xander Schauffele.

"Even on the first tee I'm like, man, I'm playing with Xander and Brooks? Like, are you kidding me? Like what an opportunity though, just to see them up close and they're great dudes and, yeah, pretty crazy," he told the media.

Theegala had strong family support this week. His brother managed to catch a 5am flight on Sunday. He caught his brother's eye through the ropes, and the two embraced.

Theegala said of that:

"Oh, I was so surprised. I couldn't believe it. He talked about he was going to fly out to Sanderson that final day. I was like, dude, don't worry, you just started school, the weather is horrible, don't worry about it. I'm sure there will be another time.

"That meant the world to me that he would come out, the middle of the school year on a Sunday. He's going to have to go back and go to school. That's incredible that he did that. It means the world to me"

The crowd were chanting his name. There is no shame in losing out to a player like Scheffler. He had been due a win.

Theegala clearly won over the spectators and will be a favourite for years to come.

He also has all the talent to compete with the big boys. But will he live up to that potential? Time will tell, but you wouldn't bet against him.