At the WM Phoenix Open, we saw hundreds of beer cans thrown on the 16th hole and some questionable celebrations by some PGA Tour players. Was this appropriate? 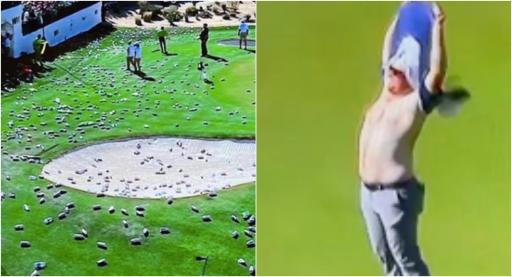 At the WM Phoenix Open, the 16th hole took centre stage once again and we saw scenes never seen before at this year's tournament.

The 20,000 fans around the green were particularly rowdy and hostile last week, booing shots that didn't go on the green and generally making noise throughout each shot taken.

There were Covid-19 restrictions at the Stadium Course last year when Brooks Koepka won his second title at the event, so this may be a reason why the fans were extra vibrant this year.

I would be lying if I said I enjoyed watching the celebrations for the two hole-in-ones we were treated to from Sam Ryder and Carlos Ortiz.

The scene of a hundred beer cans in and around the green and smattering the tee box is unacceptable, I don't see how anyone can think otherwise.

Fans don't and aren't allowed to do that at football, rugby, cricket or basketball matches, so why should it be ok at a golf course where respect and traditions are at their strictest?

On Sunday, Patrick Cantlay's putt towards the hole on the short par-3 veered offline after bobbling off a beer can dent. That has literally never happened before.

But the behaviour and stupidity of golf fans in the stands peaked this year. And it rubbed off on the players, unfortunately, but I take less issue with the actions of Harry Higgs and Joel Dahmen.

I cringed when these two entertainers took their tops off, I thought this was also a step too far. However, this was a product of the crowd behaviour so I wouldn't be as critical of Higgs and Dahmen as I am about the patrons.

Wow!!!! Sam Ryder with the hole in one on the fabled 16th hole at the Waste Management Phoenix Open! The fans went crazy throwing beer cans out of the stands! There are beer cans all over the green and in the bunkers! Ryder’s first ever hole in one! pic.twitter.com/3jUa3vALZQ

Golf fans on social media shared mixed opinions on the antics of the 16th hole. We have a selection of the most interesting responses below.

"They should know better!! This ain't football!!" one fan said.

"It’s good for the game at this particular tournament. Making it fun and entertaining," one fan commented.

"Fans had a great time with it!! No one got hurt," another fan said.

"Why on earth would you like this is beyond me, this is golf not football, no class," another fan commented.

"Fun, brilliant, get the crowd going!" one fan said.

Where do you stand on the beer can mayhem at the Phoenix Open? Share your thoughts and comments over on our social media channels.

NEXT PAGE: CARLOS ORTIZ REVEALS HOW HE CELEBRATED HIS EPIC ACE AT WM PHOENIX OPEN