Gianna Clemente becomes third youngest golfer to qualify for the US Women's Amateur in tournament history. 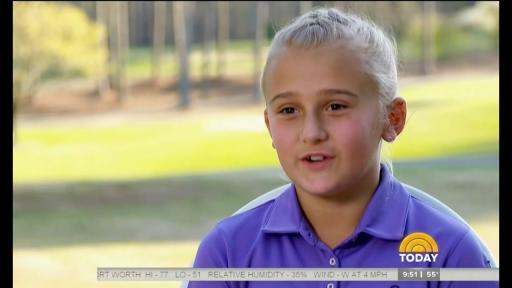 ELEVEN-YEAR-OLD golfer Gianna Clemente has become the third youngest golfer to qualify for the US Women's Amateur in the tournament's 119-year history.

Clemente, a two-time winner of her age division at the US Kids Golf World Championship who qualified for the Drive, Chip and Putt National Finals at Augusta National in 2017, shot a 1-under 71 in her 18-hole qualifying event at Ford’s Colony Country Club in Williamsburg.

She birdied three of the final five holes to take the final spot in the US Women's Amateur field.

“I’m very proud of myself. I worked pretty hard and it’s nice to know hard work pays off,” Clemente told WKBN-TV in Ohio.

Clemente will be 11 years and 4 months when she tees up in the US Women's Amateur at Old Waverly Golf Club on August 5.

She has only be surpassed as the youngest ever golfer to qualify for the tournament by Lucy Li (2013) and Latanna Stone (2012), who were both 10 years old at the time. Neither of those players would go on to make the cut and advance to matchplay.

“My dad was trying to keep me away from the scoreboard, but I just kept walking back there,” said Clemente. “I was a little nervous in the pro shop, but it was a really great feeling when I looked at the scoreboard and knew I made the Amateur.

“I believe in myself enough that I can do anything, but it’s nice to know that I accomplished something that’s very important.”