Adam Sandler recreated his iconic Happy Gilmore drive to celebrate the film's 25th anniversary, which even caused Shooter McGavin to respond with a video of his own... 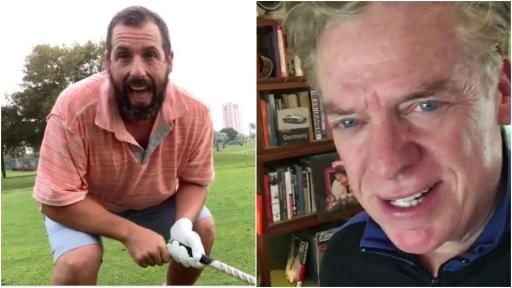 Adam Sandler celebrated the 25th anniversary of the iconic film Happy Gilmore by seeing if he still had it in him to produce one of his famous step-up drives, much to the delight of golf fans around the world.

I don't think there is a single golfer out there who hasn't tried the famous drive that helped Happy Gilmer beat his rival Shooter McGavin to win the Tour Championship 25 years ago and it seems it's been a while since Sandler has attempted it.

"Okay, it's been 25 years since I've done this, let's see what happens. I'm scared... Shooter McGavin, this is for you," said Sandler, before proving he's still got it in him.

"And I'm not lying to you that is smash. That went pretty well. You're dead Shooter!"

Of course the anniversary couldn't be celebrated properly without an appearance from Shooter McGavin himself! McGavin (whose real name is Chris McDonald, but let's be honest, no one calls him that) responded to Sandler's video with one of his own.

"Oh yeah, it's all about the short game. Drive for show, putt for the dough," says Shooter, before rolling a putt into the glass being used as a hole.

"Money! Shooter, still got it! Well thank you to all the fans and thank you to you, Adam Sandler and why don't you just meet me at the 9th green at nine Gilmore? Little secret of the pros. Oh and Gilmore, wear something nice."