An amateur golfer committed a cardinal sin in this chip shot by leaning back at impact. The rest is (painful) history. 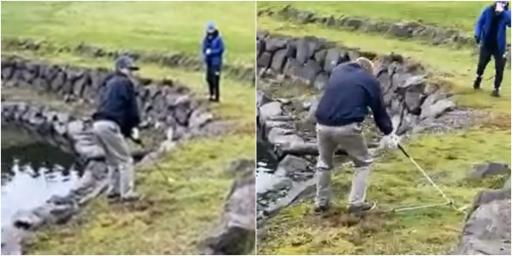 Question: how confident are you in your short game?

If the answer is yes then presumably you're happy taking on ridiculously hard shots if you are short-sighted.

No green to work with? Water looming? Perhaps a bunker in the way? Fair enough if those dangers simply do not bother you.

Myself? Not so much. There have been many a time where I have chickened out and taken the easier option available.

This video has cropped up recently, courtesy of Instagram user @will_tags. It doesn't exactly seem like it's a tough, greenside chip.

The player has ended up with what appears to be a little bit of green to work with and only has to send the ball over some rocks about a foot or so infront of him.

He is eyeing it up fairly confidently but then he commits the cardinal sin in chipping. He leans back through impact as if he is trying to scoop the ball in the air.

It's easily done and we hope he is okay. But ouch. That does look like it hurt a little bit. The ball appears to smack him directly in the head, taking off his hat in the process.

There was also an expletive that he let out moments after impact. One person commented that "technically he did clear one rock".

Next page: Rory McIlroy outlines his career path after golf