Are you allowed to use a golf club to replace the FLAGSTICK?

If you have put the flagstick down too far away from the hole and you need a quick fix, are you allowed to use a golf club? 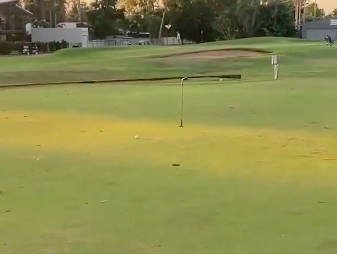 When you reach the green and you take the flagstick out, sometimes you put the pin down too far away and it would waste time to put it back in for another player's shot on to the green.

In the video below, posted by golfrules_questions, a player is chipping on to the green but the flag has already been taken out and it would waste time to put it back in.

Therefore, one of the players in the group has put their club in the hole to act as the flagstick. The player chipping can now see the hole properly.

As he chips on to the green, bizarrely from on top of a tree trunk, his ball rolls towards the hole and hits the club and stops an inch short from falling in the cup.

This raises significant questions about the rules. Are you allowed to use a club as a flagstick? Has the club been used as an illegal aid to prevent the ball from rolling by the hole?

Well, you are allowed to use a club or an artificial object as a flag. This new object just acts as the new flagstick. So the players have not broken any rules.

In this situation, if the players are trying to save time by using the club as a pin, this is completely within the rules of golf. Also, a player may stand by the hole to indicate where it is as well.

It is a rare occurrence but we always like to keep our readers updated and reassured on as many rules of golf as possible because you never know what situation can crop up on the course.