This golfer came face to face with a big bear at Swaneset Golf Course and Country Club... 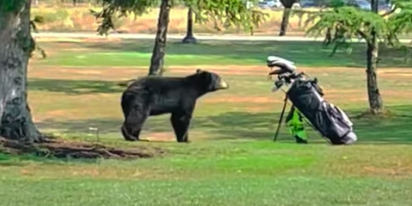 Golf courses are usually places of tranquillity and relaxation. But for one golfer, this world was turned upside down when a bear began to run at him.

At Swaneset Golf Course and Country Club in British Columbia, which is the westernmost province in Canada, golfer Tim Jeves was about to hit a shot on the 12th hole.

All of a sudden, a bear began to run towards him in a terrifying turn of events. Fortunately for Tim, he was able to deter and lure the bear away from him and the bear became distracted by his golf bag.

Tim managed to grab his phone and film the bear after it ran at him and it is fair to say that the animal's behaviour and actions on camera were quite bizarre.

The bear appeared to be unnerved by Tim's bag of clubs as it jumped away from them a couple of times. The bear then climbed a small tree to the side of the fairway and hung in the branches.

"Do I make myself big and back away or do I run?" Jeves told USAToday.

"I knew I’m supposed to do the former for a cougar but couldn’t remember whatever advice I’d been given for a frightened charging bear.

"Honestly, I didn’t have time to really think. I won’t say I ran, but I definitely didn’t back away slowly. I was moving quickly and loudly calling out ‘Hey bear! Hey bear!’ To try to scare or slow him.

"It didn’t. The one thing I did do, which I later thought was stupid, was drop my club. The one thing that might have slowed him if it had come at me."

It looks as though Tim acted as calmly and as bravely as he could, as many of us would have either been stunned with fear or ran as far away as possible.

Many of us are lucky enough not to have to deal with scary and often hungry animals on the golf course, but I am sure now that Tim will be looking over his shoulder whenever he returns for his next round at Swaneset Golf Course and Country Club.

NEXT PAGE: ERIK VAN ROOYEN: WHAT'S IN THE BAG OF THE 2021 BARRACUDA CHAMPIONSHIP WINNER?