Caddie races, aces and record scores - the best bits from the most raucous event in golf 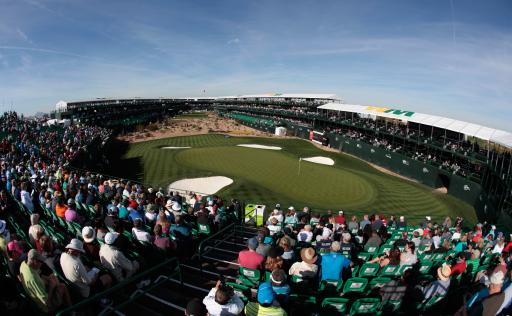 The Waste Management Phoenix Open has served up some memorable moments over the years, largely thanks to the huge crowds which turn-up and line the 16th, the only fully enclosed hole on the PGA Tour.

Here are six of our favourite moments from the event…

Tiger stepped up to the 16th tee in 1997 when he was still a young sensation and there was a feeling that something special could happen.

A perfectly struck iron shot trickled into the hole and the place erupted as beer bottles, hats and a whole lot more rained down onto the green. Cue a fist pump from Tiger and a failed high five.

He's playing the Dubai Desert Classic this week, so will not be competing in Phoenix.

Stereotypically, Americans are different from us Brits. They're less reserved, more in-your-face and like to chant 'USA' a lot.

As this reporter talks to fans surrounding the 16th hole, you get  a sense of what it must be like to be there. With the competition falling over Superbowl weekend, our friends across the pond go all out to have fun.

Caddie races have become more common on the PGA Tour over the last couple of years although the powers that be have decided to ban them this year, probably because they were actually creating an atmosphere at a golf competition - a big no no.

As the name suggests, it involves caddies racing from tee to green to the amusement of fans who cheer them all the way.

One of the greatest duels was on the 16th at the Waste Management Phoenix Open and this clip portrays the excitement of then fans and caddies.

South Korean-born James Hahn paid tribute to Psy on the 16th green last year when he decided to do his own rendition of the infamous dance from the video to Gangnam Style.

As usual, the crowd lost it and cheered Hahn’s dodgy moves.

Andrew Magee managed to bag what is believed to be the first hole-in-one on a par-4 ever on the PGA Tour at the Waste Management Open in 2001.

Magee crushed a driver on the 332-yard 17th but it ended up ricocheting off another player’s putter and into the hole. A truly bizarre occurrence.

Everything came together for Lefty. He was long and straight off the tee, he was going close with his irons but most importantly his short game was on-point.

Putts were flying in from every angle to the delight of the huge crowds.

phoneix open
tpc scoottsdale
PGA tour
PGA
Previous
Watch: Wahlberg shanks into crowd on 'stadium hole'
Next
Golf Quiz: Which of these golfers could YOU have been in a past life?!