Bryson on cameraman: "He was waiting for me to do something bad"

Bryson DeChambeau reveals more details as to why he confronted a cameraman at the Rocket Mortgage Classic... 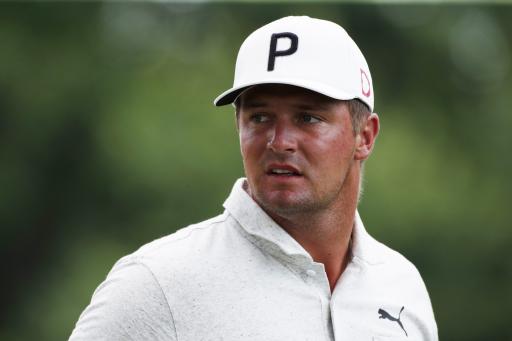 Bryson DeChambeau has added further comments as to why he confronted a cameraman during the third round of the Rocket Mortgage Classic by claiming he was "waiting for me to do something bad."

DeChambeau, who went on to win the tournament by three strokes on 23-under par to notch his sixth career PGA Tour title, was spotted taking his frustration out on a bunker on the seventh hole, and the American was not best pleased to see the cameraman remain on him the entire time.

Bryson running a little hot. Caught up with him on 7 where he took a Sergio slash at the sand after splashing out of a greenside bunker, muttered an expletive after missing the par save and spent 60 seconds in a...testy discussion with a cameraman on his way to 8 tee. pic.twitter.com/ENjQt1U689

"I was trying to show, or explain to people that I hope we all have respect for all the players out here because, you know, the guy was videoing me for over a minute after I made my shot and I didn’t understand that," DeChambeau explained on Brad Faxon's SiriusXM PGA Tour Show.

USGA introduce championship for disabled golfers starting in 2022
How much is golf YouTube sensation Rick Shiels worth?

"I hope people realize it’s not a knock on the cameraman at all. I understand he’s doing his job.

"I love all the cameramen that do their jobs out there, but I just feel like, we need to have a mutual level of respect. That’s all. There’s nothing more to be said. I have the utmost respect for them.

"Hopefully he has the utmost respect for me and has the forethinking, the foreknowledge to be able to say ‘Hey, look, there’s no reason’ to video me for a minute and a half after I hit a shot. But I get that. We’re all entertainers. They’re doing their job, I’m doing my job the best I can.

"I just felt like he was videoing me, waiting for me to do something bad. But I didn’t. And so I was going, OK man, I’d really appreciate it if you’d, you know, just kind of went off on me, you know, instead of videoing me for a minute and a half after a shot that wasn’t the best."

DeChambeau was slammed on social media over the weekend for confronting the cameraman.

NEXT PAGE: BRYSON GETS GRILLED FOR CONFRONTING CAMERAMAN