DeChambeau at the Shriners Hosptials for Children Open: "Did you get enough pictures back there?" 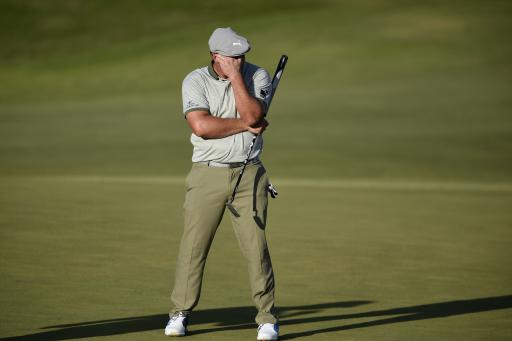 Bryson DeChambeau confronted a cameraman during the third round of the Shriners Hospitals for Children Open on Saturday, asking him if he "got enough pictures" following a difficult start to his round.

The recently crowned US Open champion got off to a great start at TPC Summerlin in Las Vegas and took the lead after shooting a 9-under par opening round.

RELATED: DeChambeau drives the green on 381-yard par-4 during opening round!

DeChambeau found himself one-stroke off the lead after the second round, shooting a 4-under 67, putting him in prime position to attack the weekend.

Two double bogeys in his opening six holes put DeChambeau out of contention during Saturday's third round, which led to the 27-year-old being five over throuugh six holes.

DeChambeau then missed a birdie opportunity at the par-4 7th and as he approached his ball to tap it in for par, he confronted a photographer who had been following him for the past few holes, saying: "Did you get enough pictures back there?"

Watch DeChambeau question the photographer in the video below:

Bryson being Bryson. This time he asked a photographer if he’s taken enough pictures... pic.twitter.com/SH2yewiFAj

It's not the first time DeChambeau has been in a situation like this. Earlier this year, he was grilled by golf fans for confronting a cameraman on his way to winning the Rocket Mortgage Classic.

Four consecutive birdies from the 8th through to the 11th helped DeChambeau salvage his score, finishing the third round level par, but too far off the lead to contend at the top of the leaderboard.

The 'Mad Scientist' shot 5-under par on Sunday to finish 18-under for the tournament and in a tie for 8th place, with Martin Laird going on to win his fourth PGA Touor title after beating Matthew Wolff and Austin Cook in a three-man play-off.

NEXT PAGE: Bryson DeChambeau hits back at Matt Fitzpatrick comment