The four-time PGA Tour winner delivered an emotional interview before his return to golf on Thursday. 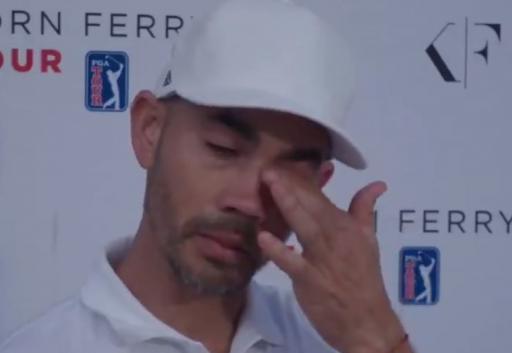 Camilo Villegas was once one of the most exciting players on the PGA Tour, claiming his first two titles in 2008 at the BMW Championship and the Tour Championship, rising to 7th in the world rankings.

The Colombian would then add two more titles to his name at the 2010 Honda Classic and the 2014 Wyndham Championship.

Villegas then struggled on the course, largely due to a pain in his shoulder which he then had a major surgery on to repair.

Returning to action at this week's Korn Ferry Tour event at TPC Sawgrass, Villegas is dealing with a pain far greater than the one he experienced on his body.

Earlier this year in March at the Honda Classic, Villegas made his first start on the PGA Tour since 2018, but noticed that his daughter Mia, who was 17-months-old at the time, was acting out of sorts, so he and his wife took Mia to the hospital.

The results were every parent's worst nightmare, revealing that Mia had tumours growing on her brain and spine.

“After the surgery, when it was time to remove the stitches, they learned the growth had become pretty aggressive,” Villegas said. “We were told we needed to start treatment right away, so they kept us there. Physically, though, she wasn’t ready to get the kind of chemo doctors were hoping for.”

Due to Mia being so young and fragile, the alternative was what Villegas referred to as "baby chemotherapy" and she has now completed the first three months of the more aggressive rounds.

Villegas wasn't sure if he wanted to play golf this week or not, given that Mia started the second round of her chemotherapy just two weeks ago, but with the support of his wife, the 38-year-old found the strength to get back to doing what he loves.

Speaking to the media ahead of his opening round on Thursday, Villegas was understandably emotional, but said he was inspired by his daughter's spirit and strength during her fight against cancer.

"But she wanted to play."

“It’s not easy, but I have actually seen Mía playing while she’s crying,” Villegas said. “She does want to play. She’s a kid. She’s young and naïve, but she’s also really tough. We just don’t know. The doctors explained that sometimes the tumors grow fast and disappear fast. So, in about six weeks, we will learn more and know where we stand.”

“My wife has been very, very strong,” Villegas said of Maria. “But, at the same time, I’ve also known that there is no option other than to be strong. You can either be strong or you can give up. And we aren’t giving up, because we do see it in Mía. She has been fighting like crazy and just isn’t giving up.”

Villegas made it clear that he does not want anyone to feel sorry for him and he and his family are doing all they can to remain positive in their "reality."

“I do not want anyone to feel sad for the Villegas family,” he said. “This is our reality and all I want is to receive the good energy. I just want people to think past this stuff and see little Mía growing up and playing. I truly believe in all the energy and prayers. That’s what we would like. It’s very easy to feel sorry for people when they are going through tough times. I’ve done it, but that’s not what I’m asking for. Maria and I are asking for good energy.”