Not only did Jack South win the Motocaddy Masters by two shots, but he also earned a £119,000 bonus for his fantastic victory. 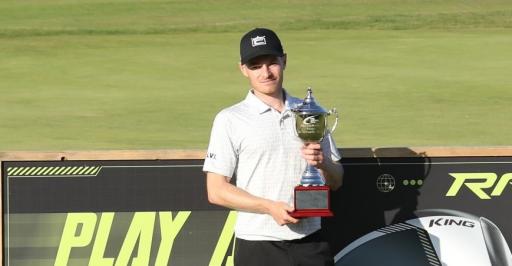 With rounds of 65, 67 and 59 (20-under-par total) South conquered the North at Levin Links with a two-shot lead over Josh Hilleard.

His victory lifted him to the top of the CPG NXTLVL Order of Merit, in association with Modest! Golf with one main event to go until Tour Championships.

"It's a phenomenal feeling, it's been such a hard year, and I've worked so hard without any reward to date," said South.

"It's been amazing to be part of the Cobra Puma Golf NXTLVL academy since 2019, and I'm so grateful for their support, I had my RadSpeed Driver on a piece of string today.

"Now I want to make sure I win the NXTLVL Order of Merit, as well as getting myself into the top five on the EuroPro Order of Merit!"

The NXTLVL Academy players play for additional prizes and bonuses through the Cobra Puma Golf Order of Merit.

RELATED: WHAT'S IN THE BAGS OF TEAM EUROPE FOR THE RYDER CUP AT WHISTLING STRAITS?

South wears the latest Puma AW21 range including the highly sought-after RS-G and has a full bag of the latest Cobra equipment including his RadSpeed Driver.