Dave Pelz: "You will hole more putts when you leave the flagstick in!"

Dave Pelz believes all golfers should follow Bryson DeChambeau and putt with the flagstick in. 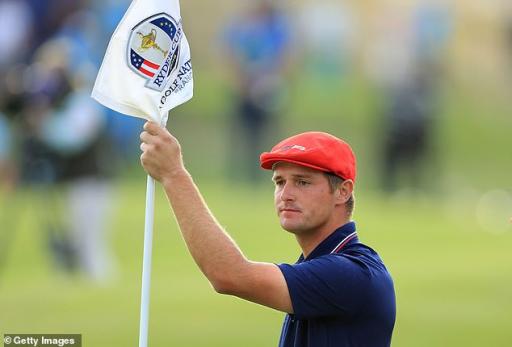 World famous short game and putting guru Dave Pelz - a man who has worked with many of golf's greats down the years such as Phil Mickelson - claims leaving the flagstick IN the hole, like Bryson DeChambeau is doing, will help every golfer hole more putts in 2019.

Pelz penned his latest post for Golf.com after watching DeChambeau consistently holing putts from inside of 10 feet with the flagstick in the hole during round one of the Sentry Tournament of Champions - something all golfers are now allowed to do under the new rules of golf as of January 1, 2019.

WATCH: BRYSON DECHAMBEAU KEEPS HOLING PUTTS WITH THE FLAGSTICK IN!

Golf's governing bodies have now given golfers three options when putting in 2019. Golfers can remove the pin completely, have someone tend the pin, or leave the pin in and unattended - the latter of which was formerly a two-stroke penalty and automatic loss of hole.

The move was initially designed to help pace of play, and according to the USGA there "should be no advantage in being able to putt with the unattended flagstick in the hole."

RELATED: THE 19 BIGGEST GOLF RULE CHANGES YOU NEED TO KNOW ABOUT IN 2019!

However, in the eyes of DeChambeau (aptly nicknamed 'The Mad Scientist'), and now Pelz, it would appear there is greater benefit for leaving the pin in the cup when putting.

DeChambeau is ready to take advantage of the new rule during every event on the PGA Tour, except for the US Open because of the thicker, metallic pins.

"It depends on the COR, the coefficient of restitution of the flagstick," said DeChambeau, who is competing in this week's Shriners Open on the PGA Tour.

"In US Opens, I'll take it out, and every other Tour event, when it's fiberglass, I'll leave it in and bounce that ball against the flagstick if I need to."

In the eyes of DeChambeau, leaving the pin in the cup will give him "a higher propensity for the ball to go in the hole."

SOME INTERESTING GOLF FLAGSTICK FACTS, ACCORDING TO PELZ...

> Assuming the pin is securely in place, standing vertical and not swaying in the wind, the hole is 4.25” wide.

> Golf balls are 1.68” in diameter. This leaves a .195”-gap of open space for the ball to fit into the hole with the flagstick in place.

Pelz is encouraging all golfers to follow DeChambeau and leave the pin in the hole when putting, especially given it's something he has scientifically proven helps golfers hole more putts.

"This effect has been tested, and my studies show conclusively that you should putt with the pin in!" said Pelz.

"I conducted my original Pin In/Pin Out test in 1990, and published the results in the December issue of GOLF Magazine.

"The testing was performed with a special putting device built to roll putts accurately aimed with a laser - and a true, pure roll - from two feet away. We rolled putts at different speeds hitting different parts of the pin on flat, uphill and downhill sloping greens.

"The test results were conclusive: You will hole a higher percentage of putts when you leave the flagstick in.

"The reason for this effect is that a significant amount of energy is lost from a putt’s speed when the ball hits a fiberglass flagstick. The speed-loss enables gravity to pull the slower moving ball down into the hole more often.

"Even though balls have changed since my testing, holes and flagsticks have not, and the “energy-loss” effect will still win the day."

Previous
DeChambeau enjoying the new rules for 2019
Next
WATCH: Eddie Pepperell's family give him his Masters invite at airport