Sam Bennett is ranked number one in the PGA Tour university standings, but he was almost caught out at the Spirit International for a bizarre reason. 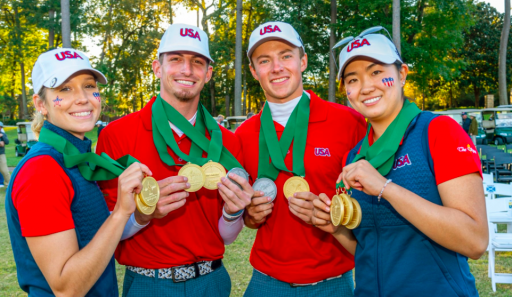 Sam Bennett and Team USA won the Spirit International at the weekend which is one of the world's top amateur events for both individuals and teams.

At the Spirit International, there is an individual medal prize for men and women which is a 54-hole event consisting of competitors from 20 different countries.

There is also the men’s team aggregate format where two players' aggregate scores compete against the other twenty teams. It is a 'both scores count' format on each hole.

The women's players also play in this format in what is a real celebration of amateur golf with a global competitive nature.

RELATED: SKY SPORTS GOLF PRESENTER: "THOMAS PIETERS IS A WORLD NO.1 IN WAITING"

Congratulations to Team USA on winning the Team Championship in Saturday’s final round of The Spirit International Amateur Golf Championship presented by The Will Erwin Headache Research Foundation @thespiritgolf https://t.co/VdsuvHktvz pic.twitter.com/oGBNImycgr

Bennett was in a great position to win the individual men's event however he received a two-shot penalty for having 15 clubs in his bag.

After confusion as to how the club made it into his bag, it was discovered that during a face-painting session before his round, his American teammate Rachel Heck put her wedge by Bennett's bag.

He accidentally put the wedge in his bag after his face was suitably painted, thinking it was one of his clubs. He received a two-shot penalty which gave him a double-bogey on his first hole at Whispering Pines G.C in Trinity, Texas.

Impressively, Bennett still went on to win the men's event. He carded a final-round score of 3-under-par to finish two shots ahead of Huge Townsend.

"I knew the golfing gods would come back and help me. I told myself, ‘Let’s just get back to even (for the round) by five.’ I made birdies at holes 2 and 5 and then it was just game on," Bennett told Golfweek.

"I figured it out right before I teed off and I felt absolutely terrible. That should have cost me, not him. It really did motivate me," said a relieved Heck.

"I wanted to contribute to the team and make sure we came out on top because I knew if we didn’t I would feel like it was partially my fault."

Alongside Rose Zhang and James Piot, together America won the overall team title with a 28-under-par total.

Bennett and Piot finished second to Sweden in the men's team event but all in all, it was a very good week for Team USA.

NEXT PAGE: AVIV DUBAI CHAMPIONSHIP: COULD THIS 175/1 SHOT CAUSE AN UPSET?

spirit international
sam bennett
rachel heck
rose zhang
james piot
Previous
European Tour drops BOMBSHELL as it announces it will rebrand as DP World Tour
Next
WATCH: Golfer loses his match then TAKES IT ALL OUT on his putter!