Fostered girl, nine, is on her way to The MASTERS for the Chip, Drive & Putt

She's even got the professionals taking notice... 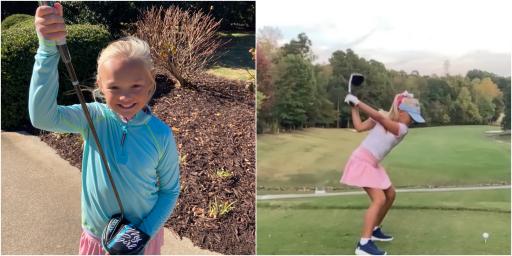 As far as feel good stories go this one is pretty special.

A nine-year-old girl who was adopted at the age of seven is on her way to the Masters for the Drive, Chip and Putt at Augusta National.

Her name is Autumn Solesbee and she was adopted two years ago by parents Donnie and Jamie.

GolfDigest reported that after watching the documentary "The Short Game" on Netflix she was absolutely hooked on the game.

Exactly two years ago, on the day before Thanksgiving, Autumn moved in with us permanently! I will never forget this day! pic.twitter.com/iigrcQSrEV

Look what we found!!! She is so excited!!! Thank you @JessicaBGolf !!! #DriveOn @ScottyCameron @Titleist pic.twitter.com/GBe64KOB46

Dad Donnie likes to document Autumn's golf journey on his Twitter page. Most recently, he shared the anniversary of the adoption.

It appears that they even had made a golf room.

Videos show her putting in the work on the range, on the putting green and even at home.

There is no denying she is hugely talented.

We are moving. Today is last time we will use our “golf room”. We will have another one but this room holds a lot of memories for us. I wasn’t laughing at Autumn, it was a reaction to keep from crying myself. But I gave her a big hug right after this. She loves this game! pic.twitter.com/utv4eXamas

My favorite video yet!! After making 5 in a row from 10 feet yesterday, Autumn wanted to try from 15 feet today. The ending is the best!!! #girldad #9yearsold #littlegirlbigdreams #perfectgreens pic.twitter.com/dCpeeP9xsp

Her swing is absolutely pure and she's even got professionals taking notice.

Max Homa, who usually roasts swings that are sent to him, just had to sit back and applaud.

She had to win three qualifiers (one was in the pouring rain) to make it to the Masters.

Pretty remarkable really, considering two years ago she had never swung a club.