How Jordan Spieth came back from the ABYSS, according to his long time coach

"Jordan believes that through difficulty you become better." 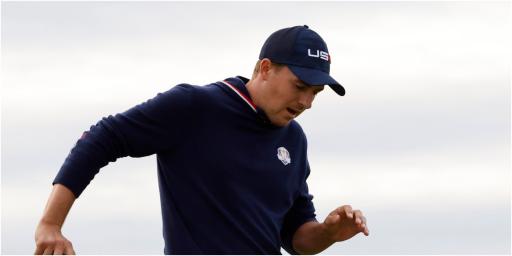 Not so long ago Jordan Spieth was in the wilderness and a shadow of his former self.

It was hard to watch the young American struggle when he had already provided so many memorable moments in his career.

Go get that he said to his caddie with a steely glare in his eye after making eagle at the 2017 Open Championship at Royal Birkdale on the way to victory.

That was everything that made Spieth great to watch. Moments of brilliant creativity. A feel player in charge of his swing. His game.

Then it all came crashing down. Four years passed without a win. Spieth had no idea where the ball was going.

It was so tough to watch, considering we know his quality. In the rankings, he plummeted to as low as 92.

Shoulders slumped on the course, grinding away at the range off it but to absolutely no avail. He was the forgotten man.

Spieth returned in 2021. His swing has changed. It's probably had more changes than Tiger Woods at this point.

That beautiful butter cut off the tee with the big stick never looks like missing his intended target, does it?

A good run at the Waste Management Phoenix Open saw him finish inside the top five, then a victory followed in Texas.

It was his 12th win on the PGA Tour at Valero, then he finished in the top five at the Masters, with two more second place finishes.

Those near misses came at the Charles Schwab Challenge and the Open. Now he's ranked number 11 in the world.

He made memories at the Ryder Cup with that ridiculous shot up a vertical bank and nearly fell in Lake Michigan.

He detailed how Spieth has come back from the abyss, but it was not without difficulty.

By 2016, Spieth's game was nowhere near where it needed to be, he said. It led to Spieth taking more ownership of his swing.

"I became a more secondary instructor-coach," he told Harmon.

"He became less focused on on the things that made him great, which was an ability to control the golf ball, and an ability to make an impact happen.

"A belief system that said, let's solve problems that relate to the downswing to produce a sensation at impact that agrees with who I am as a player."

McCormick told Harmon that his work reminds him of Spieth from earlier in his career when he was a perennial winner.

Now he's much happier, he said.

There is no doubting parenthood changes you as a person. It would surprise absolutely nobody if Spieth went on a tear in 2022.

McCormick added: "Jordan believes that through difficulty you become better."