A golf club in Rochdale has been hit with a £10,000 repair bill after an abandoned stolen car caused a serious amount of damage. 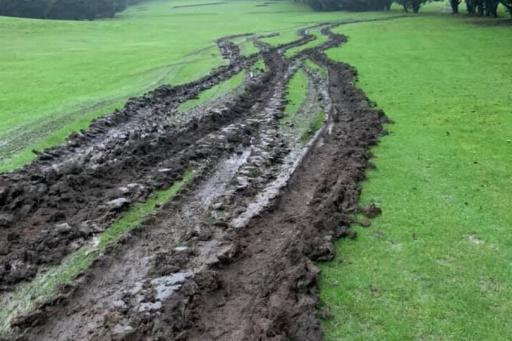 Members and staff of a golf club in Rochdale have been left furious after a stolen car was abandoned on the course, but not before causing a serious amount of damage, which has left the club with a £10,000 repair bill.

Castle Hawk Golf Club boasts a 9-hole course and an 18-hole par-3 course, as well as a driving range, indoor simulator and a usually lively club house that attracts plenty of members when the golf course is open.

The Rochdale-based golf club had been preparing for the re-opening of golf courses later this month, but have now been dealt a huge blow after a Mercedes A-Class caused deep tyre tracks across the length of the 17th fairway, before it was dumped and abandoned, where cannabis was also found inside the vehicle.

"We've been getting the course ready for when we can open and telling our members about everything we were doing, then this.

"The pics don't really do the damage justice.

"Some of the tracks were 18 inches deep. It happened when we had all that bad weather and the ground was wet through.

"It wasn't ideal to say the least."

The tyre marks are so deep that the fairway of the 17th is beyond a simple fix by the club's greenkeepers, hence why such an expensive repair job is required.

The club is now in a race against time to repair the fairway before its members return on March 29 and the hefty bill is a painful one to pay, especially with the lack of income the club has received in recent months.