Bryson DeChambeau was working up a sweat as he reached a swingspeed of 146.9mph. 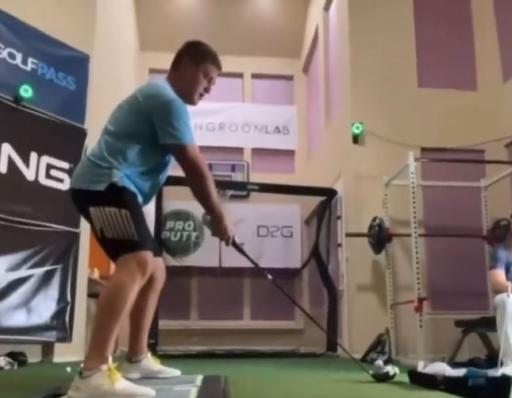 A video has gone viral on social media of Bryson DeChambeau putting the work in to try and reach even faster speeds with his driver, whilst training with World Long Drive champion Kyle Berkshire.

DeChambeau was arguably the most-talked about golfer of 2020 after he piled on the pounds in an attempt to find more speed and distance, which many told him would not put him on a path to success.

The 27-year-old silenced the doubters when he proved that hitting the ball a long way can have some serious benefits, helping him climb the world rankings and win his first major at the US Open.

In a video posted by Golfersdoingthings, DeChambeau is treating his speed practice like a powerlifter treats a deadlift, as he drips with sweat whilst putting everything he has into each swing.

WATCH THE VIDEO BELOW TO SEE DECHAMBEAU'S SPEED TRAINING

DeChambeau has been spending time with friend and World's Longest Drive No.1 Kyle Berkshire as he prepares for the new PGA Tour season, where he will be hopeful of winning multiple tournaments.

Of course with a video like this comes plenty of comments from golf fans, some in awe of the work he's putting in and others not so much.

"I would love to be with Brooks while he watches this video," said one golf fan.

"This guys out here making millions doing what he loves and these comments full of haters with no lives," said another.

NEXT PAGE: Video of Tiger Woods and son Charlie's mannerisms will blow your mind!