It is hard to work out what this golfer was aiming to achieve with this shot... 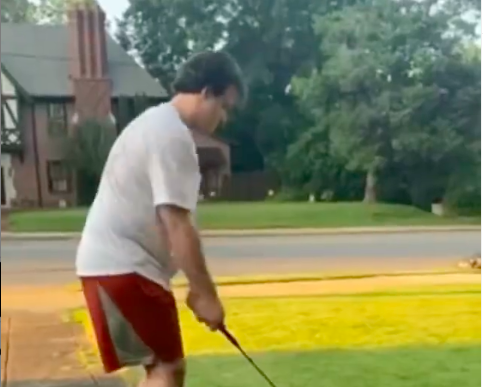 Golf is a sport that should very much remain confined to a course or the driving range and it probably shouldn't be pursued in public places.

Moreover, golf can become a dangerous sport when players begin hitting balls across busy roads with cars going by, which is what one foolish golfer learned in the footage below.

At the start of the video, the golfer addresses the ball and appears to be aiming at a house across the road which is already quite a dangerous concept.

However, when the player hits the ball, he didn't consider that a car could drive past at any moment, which could come into play if he hit a particularly bad shot.

The man, in fact, did hit a bad shot that was low enough to clatter into the car. Luckily, it looks as though no one was hurt and the car drove on without any trouble.

"Where was he trying to hit in the first place," one fan said.

"I need to see the end of this," one fan commented.

"What was the original plan here?" another fan said.

"God that's an ugly swing. Straight off the heel," another fan commented.

"Probably cheaper to pay for the dent and fine on the cop car then a new window on that beautiful house," one fan said.